Is there a trailer for Bigfoot Family movie? 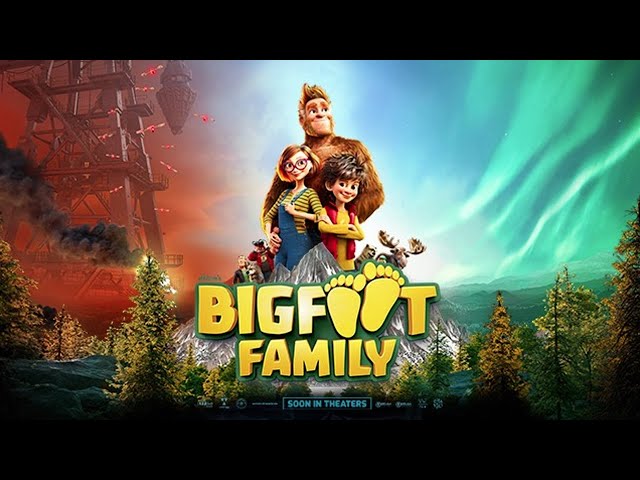 What is Bigfoot Family movie plot?

Two months after convincing his father, Bigfoot (Roger Craig Smith), to return home, Adam becomes overwhelmed with the attention his father's newfound fame has brought the family. He is also struggling to confess his feelings to his crush Emma (Clara Quilichini).
Bigfoot wants to use his fame for a good cause and decides that protecting a large wildlife reserve from a dodgy oil company in Alaska is the perfect opportunity. Adam helps his father by uploading a promotional video to social media. Swathes of protestors arrive to support Bigfoot, who mysteriously disappears one night. Adam and his mother Shelly journey to find and rescue him along with their animal friends.
Arriving in Alaska, Adam and Shelly meet with the protestor who last saw Bigfoot, Arlo Woodstock (David Lodge). Shelly follows Arlo (Xavier Fagnon) to the last location he saw Bigfoot, while Adam and his animal friends are ambushed by workers from the oil company. He escapes and encounters a wolf, whom he strikes a deal with. The wolf guides him to where the oil company is working before departing. Adam finds out that Arlo actually works for the company, and has taken Shelly; Adam evades capture from him.
Adam infiltrates the company grounds. Tycoon businessman and owner of the company, Conor Mandrake, is preparing to destroy the valley using a bomb, so that he can excavate the present oil easier. After freeing Shelly, as well as his father, who was also kidnapped by the company, Adam escapes the grounds with them. Turning back, they defuse the bomb. Conor confronts them, and Adam records him, exposing the scheme.

Who plays who in the Bigfoot Family movie?

Here is the full cast and characters of "Bigfoot Family" movie. Actors and actresses are sorted mostly in credits order.

What are Bigfoot Family filming details?

What are critics and audiences saying about Bigfoot Family movie?

More information and reviews on "Bigfoot Family" movie you can get on the following websites.

Bigfoot Family on IMDB is available at:

Bigfoot Family on Wikipedia is available at: