Is there a trailer for Troop Zero movie? 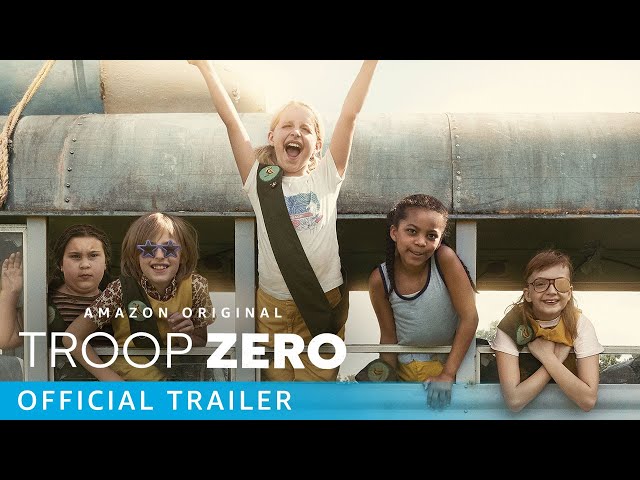 What is Troop Zero movie plot?

In rural Wiggly, Georgia in 1977, a group of elementary-school misfits band together to form their own troop of Birdie Scouts.
Led by spunky outcast Christmas Flint (Mckenna Grace), they infiltrate the Birdie Scout youth group in order to win a talent show. The winning Birdies will earn the right to have their voices included on the Voyager Golden Record, which Christmas believes will be heard by life in outer space, a connection her deceased mother nurtured. When they form the troop, the only number left unassigned in the state is zero; while the Birdie Troop leader Krystal Massey (Allison Janney) intends to assign "Troop Zero" to them as a slight, the girls, and one boy, take it as a good sign as it's the number representing infinity. Troop Zero requires a troop mother, and they find one in Christmas's father's secretary Rayleen (Viola Davis), who also has history with Mrs. Massey.
To qualify to compete in the talent show, Troop Zero must first obtain one troop badge each. As they go about earning them, they learn more about themselves and each other. The troop enters the contest, performing an interpretive dance of David Bowie's "Space Oddity". During the performance Christmas gets nervous and wets herself and the rest of the kids joins her to make her feel comfortable and the crowd laughs at them, but they carry on with their performance. In the end, they lose when the judges vote for the high-and-mighty Birdie Troop Five. Later that night, the representative from NASA joins the Troop Zero members during a meteor shower to record their voices to be transmitted into space as well. Hopeful and confident, Christmas wishes that the aliens are happy, that they're taking care of her mom, and that they have the same kind of friends she's gained from the experience.

Who plays who in the Troop Zero movie cast?

Here is the full cast and characters of "Troop Zero" movie. Actors and actresses are sorted mostly in credits order.

"Troop Zero" movie release date was scheduled to be on February 1, 2019 (Sundance) and on January 17, 2020 (United States) distributing by Amazon Studios and Amazon Prime Video.

What are Troop Zero filming details?

"Troop Zero" movie is rated "PG", according to the MPAA film rating system.

What are critics and audiences saying about Troop Zero movie?

More information and reviews on "Troop Zero" movie you can get on the following websites.

Troop Zero on IMDB is available at:

Troop Zero on Wikipedia is available at: