Here are "Wrinkles the Clown" movie trailer, plot summary, full cast and characters, release date and everything we know so far.

Is there a trailer for Wrinkles the Clown movie?

Magnolia Pictures & Magnet Releasing on Friday, September 06, 2019 released the trailer for "Wrinkles the Clown" you can watch here:
Wrinkles The Clown - Official Trailer. 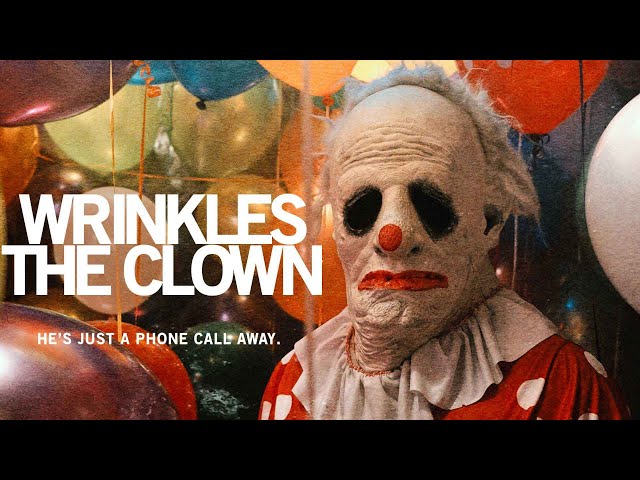 What is Wrinkles the Clown movie plot?

Here is a short review of "Wrinkles the Clown" movie plot summary.

In 2015, a video is uploaded to YouTube depicting a clown named Wrinkles emerging from beneath a young girl's bed. It quickly goes viral. In the following months, it emerges that Wrinkles is a professional clown in Florida who offers his services to the parents of misbehaving children, showing up to frighten them unannounced as a deterrent to future bad behavior. Stickers bearing Wrinkles' face and phone number begin appearing all over Florida and thousands of people begin calling it for various reasons, from parents wanting to hire Wrinkles to people making death threats. Over the course of the next four years, Wrinkles becomes an object of folklore both locally in Florida and across the United States, with children routinely calling the number either alone or with friends as a sort of rite of passage. Additionally, further videos appear depicting Wrinkles either frightening people outside their homes or engaging in disturbing behavior, such as waving to motorists from a darkened roadside.
In 2019, Wrinkles agrees to allow a documentary crew to follow him in his daily life and explain his philosophy. Wrinkles is revealed as an elderly homeless man who lives in a van in the woods outside of Naples, Florida and spends much of his free time fishing, drinking, and going to strip clubs, occasionally using the money he makes from his appearances as Wrinkles to check into motels. He claims to have no personal ideology and states that he only works as Wrinkles for the money.
Discussions with Wrinkles are intercut with interviews with a variety of individuals discussing the phenomenon, including a psychologist who debates whether Wrinkles' behavior is abusive; folklore experts who compare Wrinkles to a contemporary Bloody Mary and other mythic rituals that figure prominently in American adolescence; a historian who explores the history of the evil clown trope, tying it back to Punch and Judy; and a professional clown unhappy with the recent negative attention that Wrinkles and the remake of Stephen King's It have brought to the profession. The documentary crew further discusses Wrinkles with a number of children around America who have been impacted by his videos, from a young girl who wishes to fight him to an aspiring horror filmmaker inspired by Wrinkles' YouTube videos to begin conceptualizing his own movies. The documentary crew also examines the Wrinkles phenomenon in the context of the 2016 clown sightings.

Who plays who in the Wrinkles the Clown movie?

Here is the full cast and characters of "Wrinkles the Clown" movie. Actors and actresses are sorted mostly in credits order.

Christopher Barcia  as Self
Trevor J. Blank  as Self
Andrew Caldwell  as Self
George Holden  as Self
D.B. Lambert  as Self
Ken Miller  as Self
Benjamin Radford  as Self
Rena Sellars  as Self
Sean Whitaker  as Self
Jarrett Wideman  as Self

When is Wrinkles the Clown movie release date?

What are Wrinkles the Clown filming details?

What are critics and audiences saying about Wrinkles the Clown movie?

"Wrinkles the Clown" movie got average rating from critics. IMDB rating is 4.8/10. Rotten Tomatoes rating is 71/100.

More information and reviews on "Wrinkles the Clown" movie you can get on the following websites.

Wrinkles the Clown on IMDB is available at:

Wrinkles the Clown on Wikipedia is available at: