Is there a trailer for 21 Bridges movie? 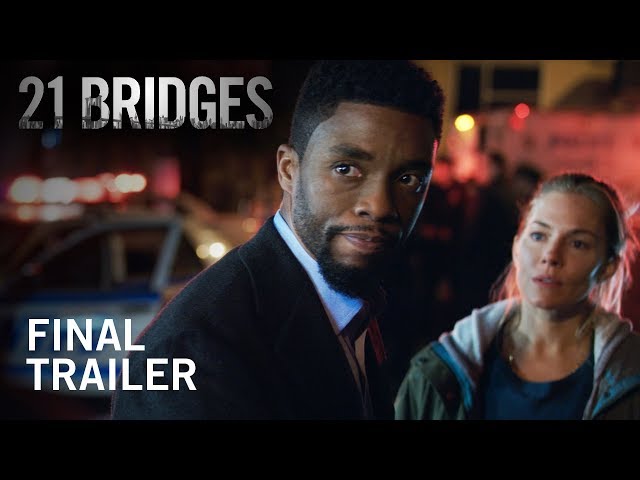 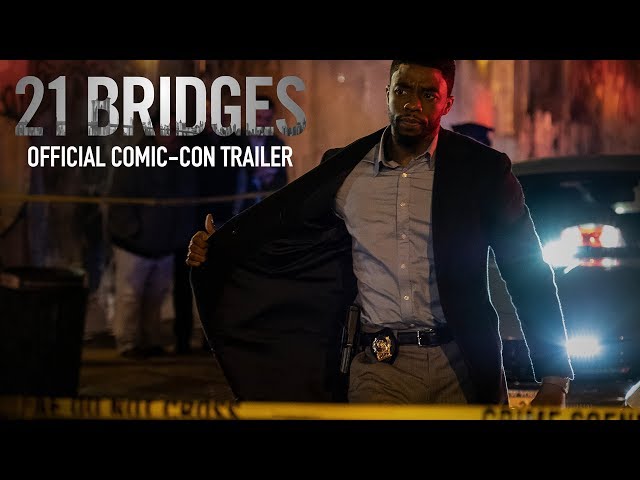 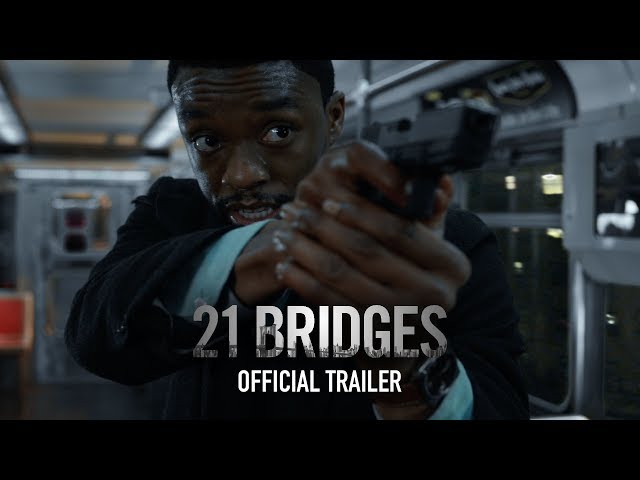 What is 21 Bridges movie plot?

Here is a short review of "21 Bridges" movie plot summary.

Andre Davis (Chadwick Boseman) is a successful NYPD officer like his father, who was murdered on duty when Davis was 13. Struggling with his father's legacy, Davis has earned a reputation for pursuing and killing "cop-killers" for years, although he claims they were all in self-defense and is uncomfortable with the label.
One night, Michael Trujillo (Stephan James) and Ray Jackson (Taylor Kitsch), two small-time criminals and war veterans, attempt to steal 30 kilograms of cocaine from a wine shop in Brooklyn. They find three hundred instead, and when police officers arrive, Ray guns them down in a shootout. After they escape into Manhattan with 50 kilograms, Michael chastises Ray for putting them in jeopardy by killing the officers. Assigned to the case, Davis and narcotics detective Frankie Burns (Sienna Miller) come into conflict with FBI agents, who attempt to take it over. Reasoning that the criminals would only be able to sell the cocaine in Manhattan before escaping the state, Davis secures the reluctant approval of the deputy mayor, the FBI, and the precinct's head, Captain McKenna (J.K. Simmons), for Manhattan Island to be locked down, on the condition that they catch the criminals before 5 a.m.
Ray and Michael blackmail their liaison, Bush, to persuade their handler to give them a bigger cut in exchange for their identities changed for their escape. They are given more money and their fixer, Adi (Alexander Siddig), gives them new identities and tells them to depart for Miami the next morning. Davis and Burns manage to identify Ray, Michael, and Bush. Bush is gunned down by Sgt. Butchco (Obi Abili) and Sgt. Dugan (Andy Truschinski), who get there first. After catching Butchco planting his backup sidearm on Bush's body and briefly scuffling with him, Davis becomes more suspicious when a team of police led by Lieutenant Kelly quickly manages to locate Adi's apartment. Adi is mortally wounded by the policemen but manages to give Michael two flash drives and their password.

Who plays who in the 21 Bridges movie cast?

Here is the full cast and characters of "21 Bridges" movie. Actors and actresses are sorted mostly in credits order.

When is 21 Bridges movie release date?

What are 21 Bridges filming details?

"21 Bridges" movie is rated "R", according to the MPAA film rating system.

What are critics and audiences saying about 21 Bridges movie?

"21 Bridges" movie got average rating from critics. IMDB rating is 6.6/10. Rotten Tomatoes rating is 53/100. Audiences polled by CinemaScore gave the film an average grade of "B+" on a scale ranging from A+ to F.

More information and reviews on "21 Bridges" movie you can get on the following websites.

21 Bridges on IMDB is available at:

21 Bridges on Wikipedia is available at: