Is there a trailer for Guest House movie? 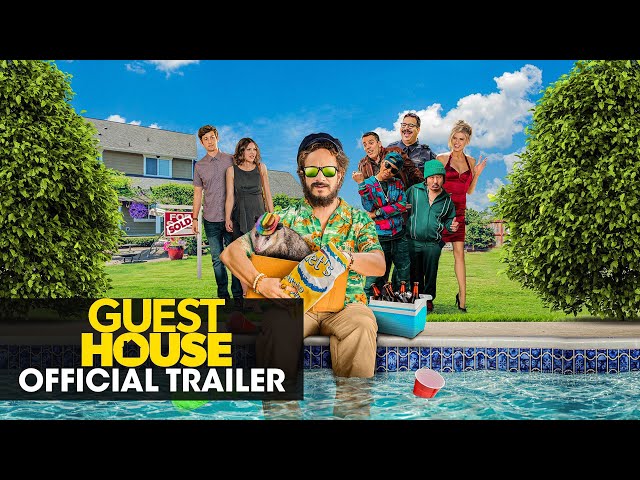 What is Guest House movie plot?

Three years after getting in trouble for drug use in College, Blake Renner (Mike Castle) and his girlfriend, Sarah Masters (Aimee Teegarden), move into a house with an excellent backyard and a guest house; however, the realtor reveals that there is one catch: a drug-addict-turned-squatter named Randy Cockfield (Pauly Shore) who is living in the guest house collecting drugs and priceless artifacts. Blake works at a Skateboard shop run by Shred, while Sarah works as a school teacher. After two months, Randy is still there. He finds a wild possum and captures it. Blade and Randy talk to each other and smoke Cannabis. Sarah is annoyed by the issues and her father, Douglas Masters (Billy Zane), does not approve of her relationship with Blake. Blake Proproses to marry Sarah and she accepts despite her fathers disapproval.
Six months later, Randy is still there and Blake and Sarah are fed up. Randy organizes an orgy, and when Blake tries to stop them he is drugged and destroys a gazebo shooting fireworks into the sky. Following the incident, Blake is arrested by corrupt cops, who are friends of Randy. A turf war starts between Randy and Blake. Blake assaults Randy and is arrested and bailed out again. The corrupt cops allow Randy to get a restraining order from Blake. Randy sneaks into the couple's house and injects MDMA in their water bottles, altering their behavior and resulting in uncontrolled sexual activity which results in Blake getting fired. With more time on his hands, Blake turns the guest house into a meth lab, causing Randy to have to escape for medical reasons. With Randy gone, Blake and Sarah organize a quiet dinner in the backyard. Randy returns and releases a drug-addicted possum with rabies on them, and the group are bitten by the possum, leading to the need of rabies injections. One member ends up in the emergency room due to the severity of the bites.

Who plays who in the Guest House movie cast?

Here is the full cast and characters of "Guest House" movie. Actors and actresses are sorted mostly in credits order.

"Guest House" movie release date was scheduled to be on September 4, 2020 distributing by Lionsgate Home Entertainment.

What are Guest House filming details?

"Guest House" movie is rated "R", according to the MPAA film rating system.

What are critics and audiences saying about Guest House movie?

More information and reviews on "Guest House" movie you can get on the following websites.

Guest House on IMDB is available at:

Guest House on Wikipedia is available at: