Is there a trailer for Late Night movie? 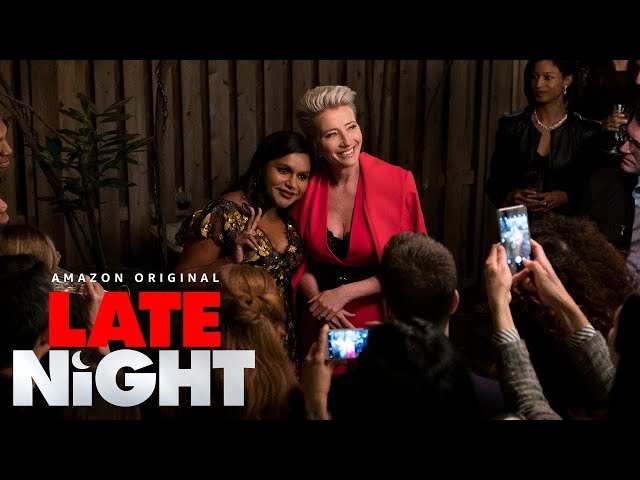 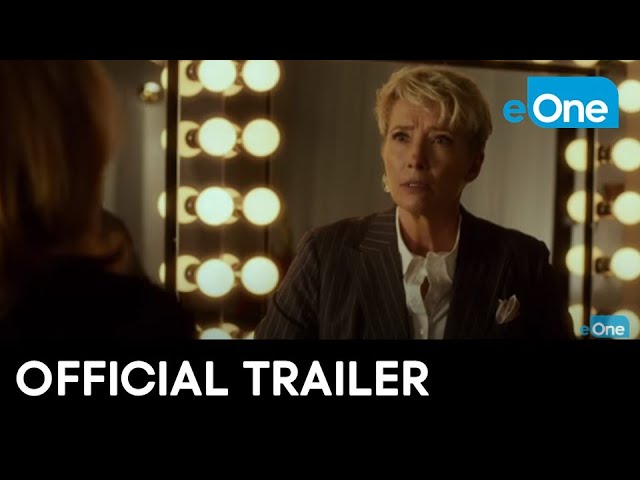 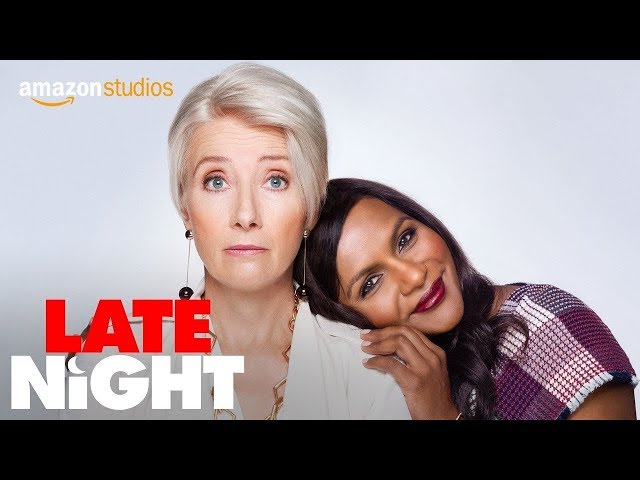 What is Late Night movie plot?

Katherine Newbury (Emma Thompson) is an acclaimed late-night talk show host with an extensive career in comedy, but her show's ratings have seen a steady decline over the past decade. The network's president, Caroline Morton (Amy Ryan), tells Katherine to fix up her show or she will be replaced.
In an attempt to revamp the show, Katherine has Molly Patel (Mindy Kaling) hired to her writing staff, mainly on the basis that she is an Indian-American woman while all remaining writers are white men. Although Molly has little experience in comedy and initially struggles, she proves her worth by giving Katherine good material to work with on her show as well as ideas on how to reach out to a bigger audience. The results prove successful.
Katherine learns that Caroline wants to pick young, popular comedian Daniel Tennant (Ike Barinholtz) to replace her as the new host. Katherine resists, as Daniel's comedy is vulgar and misogynistic. With backup from her writers, Katherine defies the network's demands and decides on air to continue her career.
An email from one of the writers, Charlie (Hugh Dancy), gets leaked, in which it is revealed that Katherine had an affair with him after her husband Walter (John Lithgow) was initially diagnosed with Parkinson's disease. In the midst of the drama, Katherine fires Molly after she criticizes her for her response to the news. Eventually, Katherine makes amends with Walter and the other writers and admits her affair to her audience. Her sincerity and passion for the show convinces Caroline to let her stick around, and Katherine later apologizes to Molly, hiring her back. The show continues to stay on air.

Who plays who in the Late Night movie cast?

Here is the full cast and characters of "Late Night" movie. Actors and actresses are sorted mostly in credits order.

Emma Thompson  as Katherine Newbury an acclaimed and legendary late-night talk show host and comedian from the United Kingdom
Mindy Kaling  as Molly Patel an Indian-American writer
Max Casella  as Burditt
Hugh Dancy  as Charlie Fain one of the writers on the show, dubbed as Four, with whom Katherine had an affair for two months three years ago
John Lithgow  as Walter Lovell professor emeritus at NYU and Katherine's husband of 25 years
Denis O'Hare  as Brad head writer of the show
Reid Scott  as Tom Campbell a monologue writer on the show, dubbed as Seven
Amy Ryan  as Caroline Morton the president of the unnamed network on which Tonight with Katherine Newbury as shown
Paul Walter Hauser  as Eugene Mancuso one of the writers on the show, dubbed as One
John Early  as Chris Reynolds one of the writers on the show, dubbed as Two
Blake DeLong  as McCary a writer with a long-distance relationship
Luke Slattery  as Hayes Campbell Tom's younger brother instead of whom Molly was hired
Megalyn Echikunwoke  as Robin Katherine's new publicist
Marc Kudisch  as Billy Kastner
Ike Barinholtz  as Daniel Tennant a popular and controversial comedian known for his vulgar and misogynistic humor and
Annaleigh Ashford  as Mimi Mismatch
Lucas Caleb Rooney  as Gabe Eichler
Bill Maher  as Bill Maher
Halston Sage  as Zoe Martlin an actress promoting The Van Hellsing Prep on Tonight with Katherine Newbury
Seth Meyers  as Seth Meyers
Jia Patel  as Pavarti Molly's cousin
Maria Dizzia  as Joan
Jake Tapper  as Jake Tapper
Sakina Jaffrey  as Molly's Mom
David Neal Levin  as Plant Manager
Paige Gilbert  as Dee
Cleo Gray  as Joyce
Kerry Flanagan  as Female Reporter
Rupak Ginn  as Teacher
Hank Lin  as Young Guy on the Street
Sophie Zucker  as Receptionist
Jadon Woodard  as Avery
Monroe Martin III  as Brandon (as Monroe Martin)
Glo Tavarez  as Young Woman

What are Late Night filming details?

"Late Night" movie is rated "R", according to the MPAA film rating system.

What are critics and audiences saying about Late Night movie?

"Late Night" movie got high rating from critics. IMDB rating is 6.5/10. Rotten Tomatoes rating is 80/100. Audiences polled by CinemaScore gave the film an average grade of "B+" on a scale ranging from A+ to F.

More information and reviews on "Late Night" movie you can get on the following websites.

Late Night on IMDB is available at:

Late Night on Wikipedia is available at: