Here are "Never Goin' Back" movie trailer, plot summary, full cast and characters, release date, streaming services and everything we know so far.

Is there a trailer for Never Goin' Back movie? 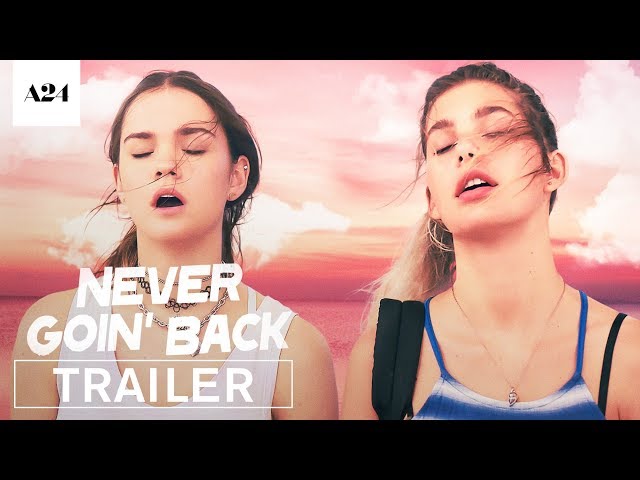 What is Never Goin' Back movie plot?

Here is a short review of "Never Goin' Back" movie plot summary.

In southern Texas, Angela (Maia Mitchell) and Jessie (Camila Morrone) are best friends and high school dropouts who spend their time working as waitresses at a mundane restaurant and wanting more out of their lives. One day, Angela decides to surprise Jessie by purchasing a trip to Galveston so they can spend Jessie's birthday at the beach. She uses their rent money to pay for it and arranges for both of them to do extra hours at the restaurant to make up for the money they spent on the trip. However, Dustin (Joel Allen), Jessie's goofy older brother and both girls roommate, spends his part of the rent in a failed drug sale he attempted with his friends. The next morning Tony (Kendal Smith), Dustin's friend, breaks in the house and steals an old TV because he thinks Dustin stole the drug money. The police arrive to check the scene of the crime and discover Angela's and Jessie's stash of weed and cocaine. Both girls are arrested.
After spending two days in juvenile detention, where Jessie suffers from constipation, the girls are released and learn that Roderick (Marcus M. Mauldin), their boss, wants to talk to them. While headed to the laundry to wash their uniform, they meet an ex-co-worker, Paul (Spencer Stevenson), who tells them that their mutual friend Art Dog (Anthony Phoenix) is having a party at his home and that they can use his washing machine. At Art Dog's house, the girls try to remain sober, but they eat cannabis cookies by accident. They arrive high at their job and Roderick, even though he cares for both of them, makes the tough decision to fire them.
With all hope lost, Jessie comes up with the idea of convincing Brandon (Kyle Mooney), their other porn-addicted roommate, to let them take the money from the cash register at the sandwich shop where he works and then tell the police he was robbed. At first Brandon doesn't like the idea but he accepts when the girls promise to have a threesome with him; a promise they do not intend to keep. In that moment, a disguised Dustin and his other friend Ryan (Matthew Holcomb) enter and try to steal the money in order to recover what they lost in the drug deal. The girls immediately recognize them and they admit to Brandon they don't have enough money to pay for rent. After the boys leave, a terrified Brandon admits that there is only $50 in the register, and that the rest is in a safe he does not have the key for.

Who plays who in the Never Goin' Back movie cast?

Here is the full cast and characters of "Never Goin' Back" movie. Actors and actresses are sorted mostly in credits order.

When is Never Goin' Back movie release date?

What are Never Goin' Back filming details?

"Never Goin' Back" movie is rated "R", according to the MPAA film rating system.

What are critics and audiences saying about Never Goin' Back movie?

"Never Goin' Back" movie got high rating from critics. IMDB rating is 6/10. Rotten Tomatoes rating is 75/100. The audience also likes the film.

More information and reviews on "Never Goin' Back" movie you can get on the following websites.

Never Goin' Back on IMDB is available at:

Never Goin' Back on Wikipedia is available at: