Here are "The Vast of Night" movie trailer, plot summary, full cast and characters, release date, streaming services and everything we know so far.

Is there a trailer for The Vast of Night movie?

Amazon Prime Video on Thursday, February 06, 2020 released the trailer for "The Vast of Night" you can watch here:
The Vast Of Night - Official Trailer | Prime Video. 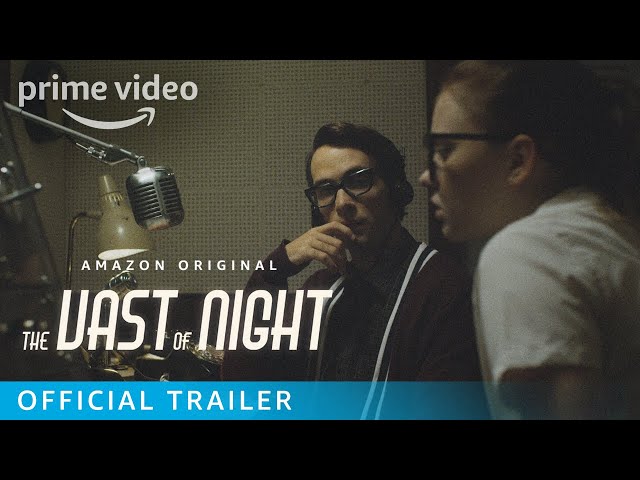 What is The Vast of Night movie plot?

Here is a short review of "The Vast of Night" movie plot summary.

In 1950s Cayuga, New Mexico, teenage disc jockey Everett (Jake Horowitz) helps prepare for a high school basketball game. He and his friend Fay (Sierra McCormick) test out her new tape recorder, and Everett walks her to her job as a switchboard operator before starting his own night shift at the radio station. Fay listens to Everett's show, which is interrupted by a mysterious audio signal. Fielding calls about a strange wind-like phenomenon from the sky, she hears the same signal over the phone line; her connections drop when she calls friends about the signal. Fay calls Everett, who asks his listeners for information about the signal, which he broadcasts on the air.
A man named Billy (Bruce Davis) calls, and Everett broadcasts him live. Billy explains that he served in the military and was flown to a highly secretive location in the desert. Warned that telling anyone about the classified project would "endanger America", he and the other personnel built a large underground bunker to house an enormous unknown object. Flying away from the facility, he heard the same unexplained signal on the plane's radio. Billy developed a lung condition that he believes was caused by his time in the desert and learned of other instances of the military burying similar cargo in secret locations, where the same signal was heard. He explains that the sound appears to be a communication signal, sometimes transmitted higher than any man-made object could fly.
The call is briefly disconnected, but Billy calls back and reveals that he and the other personnel chosen for these projects were all African American or Mexican, to ensure they were less likely to be believed by the public. A friend of his managed to record the signal and sent copies to Billy and others who worked on the projects; one tape was given to an Air Force general in Cayuga, now deceased. Fay realizes that his tapes were given to the local library and steals them. Billy is disconnected, and Everett and Fay find the recording of the signal and broadcast it, but the radio station's power is knocked out. They race to the switchboard office, where Fay receives numerous reports of "something in the sky", and they meet Gerald (Mark Banik) and Bertsie (Cheyenne Barton), who have been driving in pursuit of the same unidentified flying object. An elderly woman named Mabel (Gail Cronauer) calls and offers to provide more information about the signal.

Who plays who in the The Vast of Night movie cast?

Here is the full cast and characters of "The Vast of Night" movie. Actors and actresses are sorted mostly in credits order.

When is The Vast of Night movie release date?

"The Vast of Night" movie release date was scheduled to be on January 26, 2019 (Slamdance) and on May 29, 2020 (United States) distributing by Amazon Studios and Amazon Prime Video.

What are The Vast of Night filming details?

"The Vast of Night" movie is rated "PG-13", according to the MPAA film rating system.

What are critics and audiences saying about The Vast of Night movie?

More information and reviews on "The Vast of Night" movie you can get on the following websites.

The Vast of Night on IMDB is available at:

The Vast of Night on Wikipedia is available at: