Here are "Save Yourselves!" movie trailer, plot summary, full cast and characters, release date and everything we know so far.

Is there a trailer for Save Yourselves! movie?

Bleecker Street on Thursday, September 10, 2020 released the trailer for "Save Yourselves!" you can watch here:
SAVE YOURSELVES! I Official Trailer I Bleecker Street. 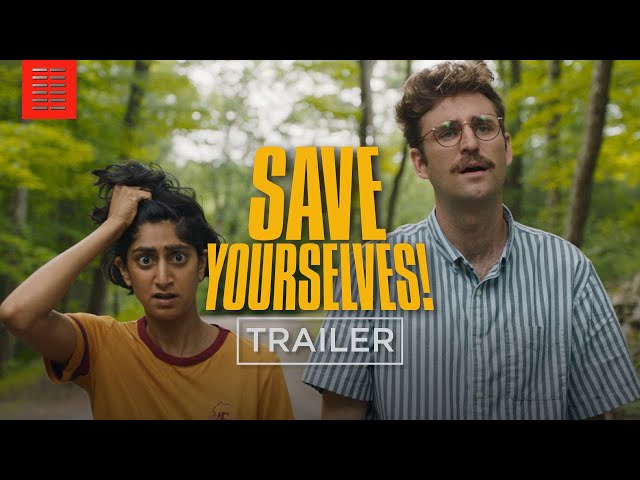 SAVE YOURSELVES! I Official Trailer I Bleecker Street | September 10, 2020

What is Save Yourselves! movie plot?

Here is a short review of "Save Yourselves!" movie plot summary.

A prologue states that this was the year the Earth was lost. A 30-something Millennial couple, Su (Sunita Mani) and Jack (John Reynolds), decide to "disconnect" from their internet-obsessed and superficial lives in Brooklyn by turning off their phones for a weekend and staying at friend's cabin in the woods. As they drive away, objects begin descending from the sky. At the cabin, the couple reconnect with one another, discussing various ways to "become better people", such as by baking bread, going vegetarian, or starting a community garden. During their stay, Jack notices a strange fuzzy ball-like object sitting in the den, which Su calls a pouffe (which she later says is the name of a kind of foot-rest like an ottoman) and asks Su if it was there when they arrived, but Su ignores it and attempts to have Jack do several exercises she wrote down from an online list to help them become closer and more motivated as a couple and as adults. This irritates Jack and the two fight, causing Jack to go outside to chop wood.
Angry at Jack, Su secretly turns on her phone and listens to several strange voicemails from her mother about giant rats that consume ethanol infesting New York. Before she can listen further, Jack returns, and Su quickly hides her phone. Jack admits to Su that he feels inadequate as an man, but is committed to them becoming closer. The couple make up, but in the morning, they realize his sourdough starter and their whiskey bottle are empty and that the fuzzy ball, has moved. Realizing the starter and the whiskey contain ethanol, Su recalls her mother's voicemails and admits to Jack that she broke their disconnecting agreement, but that she thinks the voicemails may be related to what's going on. The two hide upstairs and turn on their phones, finding they've lost signal but learning from various belated voicemails and texts already on her phone from the day before that the pouffes are alien invaders that have attacked New York, forcing a mass evacuation, and that the pouffes feed on ethanol.

Who plays who in the Save Yourselves! movie?

Here is the full cast and characters of "Save Yourselves!" movie. Actors and actresses are sorted mostly in credits order.

When is Save Yourselves! movie release date?

"Save Yourselves!" movie release date was scheduled to be on January 25, 2020 (Sundance) and on October 2, 2020 (United States) distributing by Bleecker Street Media and levelFILM.

What are Save Yourselves! filming details?

"Save Yourselves!" movie is rated "R", according to the MPAA film rating system.

What are critics and audiences saying about Save Yourselves! movie?

More information and reviews on "Save Yourselves!" movie you can get on the following websites.

Save Yourselves! on IMDB is available at:

Save Yourselves! on Wikipedia is available at: