Watch the official trailer for "Greenland" 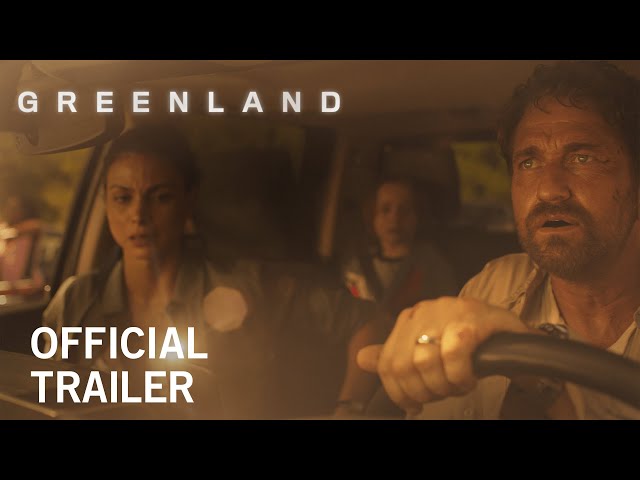 What is "Greenland" about?

John Garrity (Gerard Butler) is a Scottish structural engineer living in Atlanta, Georgia with his estranged wife, Allison (Morena Baccarin), and their diabetic son, Nathan (Roger Dale Floyd). He returns home from work to reconcile with his family and prepare to host a party with their neighbors to watch the passing of a recently-discovered interstellar comet, named Clarke.
Arriving at a grocery store, John and Nathan notice a fleet of military cargo transport jets flying north in formation, much to their bewilderment. In the store, John receives a strange automated phone call, informing him that he and his family have been pre-selected for emergency sheltering. Worried by this, John rushes home to the party, just as a comet fragment enters the atmosphere on live television. A shockwave rattles the area and blows out windows as the fragment, previously anticipated to land in the Atlantic Ocean, impacts Tampa, Florida and lays waste to much of the state. John once again receives an automated call, which also displays on the television in front of his family and neighbors with instructions to be at Robins Air Force Base to make an evacuation flight. Terrified, their neighbors storm out of the house to be close with their families while the Garritys rush to pack up and leave. Before they can, their neighbor, Ed, tells them that Clarke is a giant cluster of objects that are expected to collide with Earth over the next two days, with the biggest fragment expected to cause an extinction level event. Debra, another one of their neighbors, desperately begs to leave their daughter Ellie with the Garrity's to be saved, but John speeds off, knowing she would be turned away.

Who's in the "Greenland" cast?

Here is the full cast and characters of "Greenland".

When is "Greenland" released in cinemas?

What are "Greenland" film specifications?

The film "Greenland" is rated with "PG-13" rating.

"Greenland" filming. Principal photography began in June 2019 and wrapped up on August 16 of the same year in Atlanta.

What are critics and audiences saying about "Greenland"?

Other sites about "Greenland"

More information about "Greenland" you can get at: