Here are "The First Purge" movie trailer, plot summary, full cast and characters, release date and everything we know so far.

Is there a trailer for The First Purge movie?

Universal Pictures on Friday, April 06, 2018 released the trailer for "The First Purge" you can watch here:
The First Purge - Official Trailer . 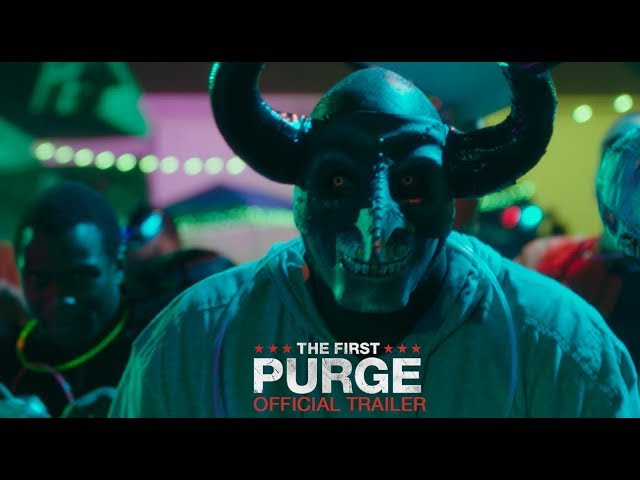 What is The First Purge movie plot?

Here is a short review of "The First Purge" movie plot summary.

Deranged drug addict Skeletor (Rotimi Paul) discusses his dark thoughts, including his desire to "purge" and unleash his hatred on other people. An NFFA employee tells Skeletor that he can very soon.
In an alternate 2014, the New Founding Fathers of America (NFFA) are now the most powerful party in the United States, including the current President, Bracken. In 2017, NFFA chief of staff Arlo Sabian (Patch Darragh) and sociologist Dr. May Updale announce an experiment to take place on Staten Island where for 12 hours, citizens will be allowed to purge and release their inhibitions in any way they choose, including murder. The NFFA offers residents $5,000 to stay during the experiment, with additional compensation if they join the purge and survive. They also outfit the participants with contact lens cameras so that they can monitor all activity and put tracking devices in them so they will know if they try to leave the island.
Drug lord Dmitri (Y'lan Noel) tells his dealers that they will not be leaving the island, as moving his large amounts of money and product will draw too much attention, and tells them to stay in a safe house and lay low. Dealer Capital A (Christian Robinson) decides to defy this order and go out and purge, while newbie dealer Isaiah (Joivan Wade) is attacked and injured by Skeletor. Isaiah goes to his sister Nya (Lex Scott Davis), an anti-Purge activist and Dimitri's ex-girlfriend, for treatment.
As people flee Staten Island, Nya joins her friends Dolores (Mugga), Luisa (Luna Lauren Velez), and Selina (Kristen Solis) in a church to wait out the Purge. Dmitri has stayed behind, and Anna (Maria Rivera) and Elsa (Chyna Layne), two prostitutes, are sent by his dealers to his office to keep him company. Skeletor commits the first Purge murder, and the video recorded by the NFFA goes viral. The NFFA also observe that more parties than killings are taking place and that crimes are mostly looting, vandalism, and disorderly conduct, as opposed to the expected murder.

Who plays who in the The First Purge movie?

Here is the full cast and characters of "The First Purge" movie. Actors and actresses are sorted mostly in credits order.

When is The First Purge movie release date?

What are The First Purge filming details?

"The First Purge" movie is rated "R", according to the MPAA film rating system.

What are critics and audiences saying about The First Purge movie?

"The First Purge" movie got average rating from critics. IMDB rating is 5.2/10. Rotten Tomatoes rating is 56/100. The audience dislikes the film either. Audiences polled by CinemaScore gave the film an average grade of "B-" on a scale ranging from A+ to F.

More information and reviews on "The First Purge" movie you can get on the following websites.

The First Purge on IMDB is available at:

The First Purge on Wikipedia is available at: