Here are "The Secrets We Keep" movie trailer, plot summary, full cast and characters, release date and everything we know so far.

Is there a trailer for The Secrets We Keep movie?

Bleecker Street on Monday, August 17, 2020 released the trailer for "The Secrets We Keep" you can watch here:
THE SECRETS WE KEEP I Official Trailer I Bleecker Street. 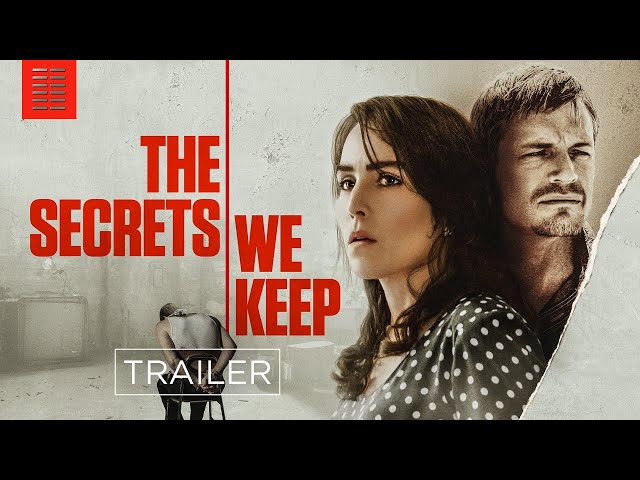 THE SECRETS WE KEEP I Official Trailer I Bleecker Street | August 17, 2020

What is The Secrets We Keep movie plot?

Here is a short review of "The Secrets We Keep" movie plot summary.

In post-World War II America, Maja Reid (Noomi Rapace) is a Romanian refugee who has built a new life with her American husband, Lewis (Chris Messina), and a young son, Patrick (Jackson Dean Vincent), but she is still haunted by the darkest memories of the war. While walking on the street, she recognizes the man whom she believes is a former German soldier she encountered 15 years ago. She tails him to the house where she sees that he has a wife and two children. The next day, on a pretense that her car broke down, Maja knocks the man out and puts him in the trunk.
Returning to the house, Maja tells her past memories to Lewis, saying that she and other women escaped to Romania when the SS soldiers found them and murdered few of them. She admits that she put the man in the trunk, disturbing Lewis. The two of them then bring the man to the basement and tie him up in the chair. There, Maja interrogates the man when the latter insists that his name is Thomas Steinmann and he is a Swiss but Maja disputes him, telling him that his name is "Karl" and background of his war crimes. Thomas attempts to escape and yells for help at the front door but Lewis incapacitates him. When one of the neighbor named Jim awaken by Thomas' yell, Maja convinces him that it came from the street. At the clinic where Lewis is working, he looks a document of Thomas, stating that he is indeed a native from Switzerland.
At the house, Thomas continues to deny Maja's allegations of Thomas' crimes until she forces him to say "Zigeuner Fotze" (German word for "Gypsy Cunt"). Throughout the film, a series flashback reveals the German soldiers killing and raping the women. She reveals that her sister Miriah (Miluette Nalin) was among the victim. When Thomas is confronted by Lewis, he tells her that he was in Zurich for the whole war and also tells the name of his acquaintances to Lewis that could prove Thomas' existence in that area. Thomas added that he became the naturalized citizen of the United States after he married Rachel (Amy Seimetz), and promises that he will not go to the police because he has a forged travel visa document in order to stay in the U.S.

Who plays who in the The Secrets We Keep movie?

Here is the full cast and characters of "The Secrets We Keep" movie. Actors and actresses are sorted mostly in credits order.

When is The Secrets We Keep movie release date?

What are The Secrets We Keep filming details?

"The Secrets We Keep" movie is rated "R", according to the MPAA film rating system.

What are critics and audiences saying about The Secrets We Keep movie?

More information and reviews on "The Secrets We Keep" movie you can get on the following websites.

The Secrets We Keep on IMDB is available at:

The Secrets We Keep on Wikipedia is available at: