Here are "Songbird" movie trailer, plot summary, full cast and characters, release date and everything we know so far.

Is there a trailer for Songbird movie?

STXfilms on Thursday, October 29, 2020 released the trailer for "Songbird" you can watch here:
Songbird | Official Trailer | On Demand Everywhere December 11. 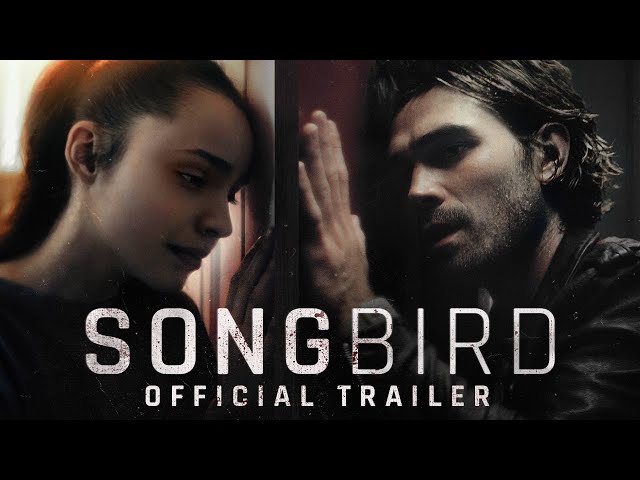 What is Songbird movie plot?

Here is a short review of "Songbird" movie plot summary.

By 2024, the COVID-19 virus has mutated into COVID-23 and the world is in its fourth pandemic year. In the United States, people are required to take temperature checks on their cell phones while those infected with COVID-23 are taken from their homes against their will and forced into quarantine camps, also known as "Q-Zones" or concentration camps, where some fight back against the brutal restrictions. In these camps, the infected are left to die or forcibly get better.
Nico Price (KJ Apa), a motorbike courier with immunity, due to the fact he was infected with the virus, is in a virtual relationship with Sara Garcia (Sofia Carson), a young artist living with her grandmother Lita whose lockdown prohibits them from physical contact. Nico works for Lester (Craig Robinson), who specializes in delivering packages to wealthy individuals. One of their biggest clients is the Griffins, Piper and William (Bradley Whitford), whose daughter Emma has an auto-immune disorder. William is a former record executive having an affair with May (Alexandra Daddario), a singer who makes a living online selling covers of classic songs. May develops a bond with Michael Dozer (Paul Walter Hauser), a disabled war veteran who works for Lester as a drone operator to keep track of their couriers.
One night, Lita begins to show symptoms of COVID-23 while the "sanitation" department, led by Emmett Harland (Peter Stormare), is forcing Sara's neighbor Alice (Michole Briana White) out of her apartment after getting infected. Harland warns Sara that their apartment building has seen a rise in infections. Sara informs Nico about Lita's condition, leading Nico to spend the night by Sara's apartment door. In the morning, Sara passes her temperature check, but Lita fails hers. Nico promises to keep Sara from being taken.

Who plays who in the Songbird movie?

Here is the full cast and characters of "Songbird" movie. Actors and actresses are sorted mostly in credits order.

When is Songbird movie release date?

What are Songbird filming details?

"Songbird" movie is rated "PG-13", according to the MPAA film rating system.

What are critics and audiences saying about Songbird movie?

More information and reviews on "Songbird" movie you can get on the following websites.

Songbird on IMDB is available at:

Songbird on Wikipedia is available at: