Here are "Pain and Glory" movie trailer, plot summary, full cast and characters, release date, streaming services and everything we know so far.

Is there a trailer for Pain and Glory movie?

Sony Pictures Classics on Thursday, August 08, 2019 released the trailer for "Pain and Glory" you can watch here:
PAIN AND GLORY | Official Trailer HD (2019). 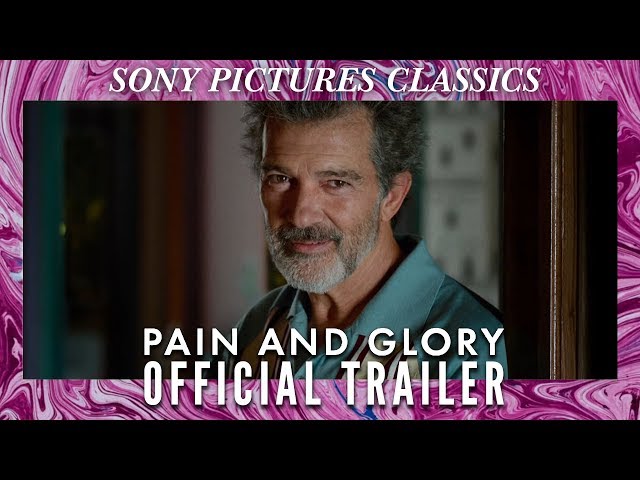 What is Pain and Glory movie plot?

Here is a short review of "Pain and Glory" movie plot summary.

The film narrates a series of reunions of Salvador Mallo (Antonio Banderas), a film director in his decline. Some of these reunions play out in real time, others are recalled through flashbacks: his childhood in the 1960s, when he moved with his family to the primitive village of Paterna, his schooling, his first adult love in Madrid in the 1980s, the pain of the breakup of this relationship, writing as a therapy to forget, the discovery of cinema, facing the impossibility of continuing filming, etc.
Spanish film director Salvador Mallo is in the middle of a creative crisis, afflicted with physical and mental ailments, just as an earlier film of his (Sabor, or Flavor) has been remastered and re-released to appreciative audiences. Prompted by his old friend, Zulema (Cecilia Roth) he calls in on Alberto Crespo (Asier Etxeandia), the lead actor from Sabor, with whom he has not spoken for 32 years due to a quarrel over the influence of the actor's heroin use on his performance. Crespo introduces Salvador to heroin smoking.
When taking the drug Salvador revisits some of his childhood experiences: one takes place during his childhood, where he moves into a whitewashed cave house with his father (Raúl Arévalo) and mother Jacinta (Penélope Cruz), and a local laborer named Eduardo (César Vicente) learns to read and write under his tutelage.
Crespo brings a monologue of Salvador's memories from 1980s Madrid to the stage in which Salvador's lover Federico (Leonardo Sbaraglia) is mentioned; Federico happens to be sitting in the audience. Federico (who has married and had children in Argentina) meets Salvador in his apartment where the pair drink toasts to one another, reminisce and flirt briefly before parting amicably. Salvador recognizes that his struggles with heroin and drug addiction mirrors that which he witnessed in Federico during their time together. With his assistant, Mercedes (Nora Navas), he tells a doctor that he needs treatment for his back pain and heroin addiction.

Who plays who in the Pain and Glory movie?

Here is the full cast and characters of "Pain and Glory" movie. Actors and actresses are sorted mostly in credits order.

When is Pain and Glory movie release date?

What are Pain and Glory filming details?

"Pain and Glory" movie is rated "R", according to the MPAA film rating system.

What are critics and audiences saying about Pain and Glory movie?

"Pain and Glory" movie got high rating from critics. IMDB rating is 7.5/10.

More information and reviews on "Pain and Glory" movie you can get on the following websites.

Pain and Glory on IMDB is available at:

Pain and Glory on Wikipedia is available at: