Here are "The Turning" movie trailer, plot summary, full cast and characters, release date, streaming services and everything we know so far.

Is there a trailer for The Turning movie?

Universal Pictures on Wednesday, October 09, 2019 released the trailer for "The Turning" you can watch here:
The Turning - Official Trailer. 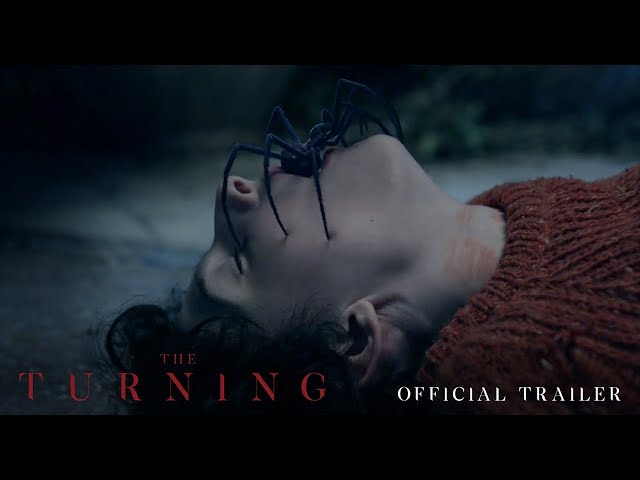 What is The Turning movie plot?

Here is a short review of "The Turning" movie plot summary.

Miss Jessel (Denna Thomsen), the live-in tutor at the Fairchild Estate, flees the house in a panic and is attacked by a ragged man.
Sometime later, in 1994, Kate Mandell (Mackenzie Davis) becomes a governess for seven year old Flora Fairchild (Brooklynn Prince) after Miss Jessel's disappearance. Before leaving, she visits her mother, Darla (Joely Richardson), who lives in a mental institution because she suffers from delusions. At the Fairchild Estate, Kate is informed by the caretaker Mrs. Grose (Barbara Marten) that Flora witnessed her parents die in a car accident and is a "special case". Flora confesses to Kate that she is afraid Kate will leave her like Miss Jessel did but Kate promises not to.
That night, Kate encounters Flora's brother Miles (Finn Wolfhard), who is back from boarding school. The next day, she receives a call from the school's principal, who informs her that Miles is expelled after having been found strangling another boy. Kate becomes more aggravated with Miles when he and Flora begin pulling pranks on her, lashing out at him. Miles suggests he teach her how to ride horses to make it up to her, as their former riding instructor Quint has recently died.
Kate notices strange occurrences happening at night, so she begins to keep her lights on when she goes to sleep. One day she suggests they go into town, to the dismay of both Flora and Mrs. Grose. Flora throws a fit and runs out of the car after Kate refuses to stop it. Miles warns her to leave but Kate decides to stay due to her promise to Flora. After reconciling, the group plays tag in the house. While looking for Miles, Kate is attacked by the ghost of Miss Jessel. She finds Miss Jessel's journal, which contains frightening entries about how Quint was obsessed with her and took pictures of her while she slept. Mrs. Grose tells her that Quint died a couple weeks following Miss Jessel's departure when he fell from his horse while riding drunk. Kate continues to see Quint and Miss Jessel's ghosts around the house, making her paranoid.

Who plays who in the The Turning movie cast?

Here is the full cast and characters of "The Turning" movie. Actors and actresses are sorted mostly in credits order.

When is The Turning movie release date?

What are The Turning filming details?

"The Turning" movie is rated "PG-13", according to the MPAA film rating system.

Principal photography began with the cast and crew behind strict security at Killruddery House in County Wicklow.

What are critics and audiences saying about The Turning movie?

"The Turning" movie got low rating from critics. IMDB rating is 3.8/10. Rotten Tomatoes rating is 13/100. Audiences polled by CinemaScore gave the film an average grade of "F" on a scale ranging from A+ to F.

More information and reviews on "The Turning" movie you can get on the following websites.

The Turning on IMDB is available at:

The Turning on Wikipedia is available at: