Is there a trailer for Rambo: Last Blood movie? 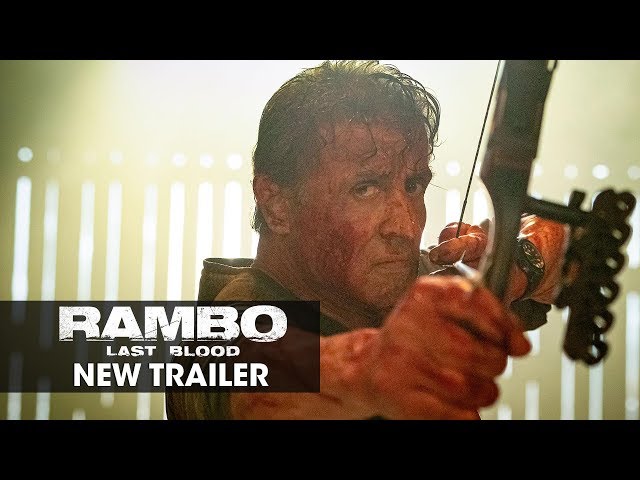 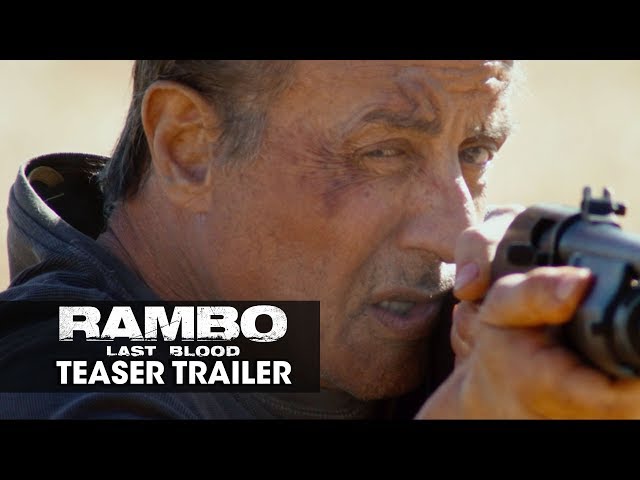 Eleven years after the events in Burma, Vietnam War veteran John Rambo (Sylvester Stallone) lives in Bowie, Arizona at his deceased father's horse ranch, which he manages with his old friend, Maria Beltran (Adriana Barraza), and her granddaughter, Gabriela (Yvette Monreal). Gabriela tells Rambo that a friend of hers, Gizelle (Fenessa Pineda), has found Gabriela's biological father, Manuel (Marco de la O), in Mexico. Both Rambo and Maria tell her not to go to Mexico, but Gabriela secretly drives there to ask why Manuel abandoned her and her mother years ago. Gizelle leads Gabriela to Manuel's apartment, where he coldly tells her that he never cared for Gabriela or her mother.
Gizelle takes a heartbroken Gabriela to a nearby club, where Gabriela is drugged and kidnapped by the enforcers of a Mexican cartel. Meanwhile, Maria informs Rambo of Gabriela's disappearance in Mexico. Rambo rushes to Mexico and interrogates both Manuel and Gizelle about Gabriela's whereabouts. After being threatened by Rambo, Gizelle reluctantly leads Rambo to the club where Gabriela was last seen and confronts El Flaco (Pascacio López), the man who last spoke with Gabriela. A mysterious woman, Carmen Delgado (Paz Vega), tails Rambo as El Flaco leads him to Gabriela's location. Rambo is immediately confronted, beaten and marked by the cartel, led by the brothers Hugo (Sergio Peris-Mencheta) and Victor Martinez (Óscar Jaenada). They take his driver's license with the location of Rambo's ranch and a photo of Gabriela, whom Victor recognizes. The cartel vow to mistreat Gabriela further due to Rambo's actions.
Carmen takes Rambo back to her home where she cares for him until he fully recovers after four days. Meanwhile, Gabriela is stripped and consistently dosed with heroin and sold to be raped repeatedly. Carmen says she is an independent journalist who has been investigating the Martinez brothers, who kidnapped and murdered her sister. Rambo later raids one of the brothels, killing several men until he finds a drugged Gabriela. While driving back home in his pickup, Rambo thanks Gabriela for giving him hope for ten years but she dies from the forced overdose. An enraged Rambo sends Maria away and rigs the ranch with traps for a confrontation, and later returns to Mexico to ask for Carmen's help in finding Victor. Carmen initially refuses and tells Rambo that it will solve nothing, but is convinced after he appeals to her grief and frustration.

Who plays who in the Rambo: Last Blood movie cast?

Here is the full cast and characters of "Rambo: Last Blood" movie. Actors and actresses are sorted mostly in credits order.

What are critics and audiences saying about Rambo: Last Blood movie?

"Rambo: Last Blood" movie got average rating from critics. IMDB rating is 6.1/10. Rotten Tomatoes rating is 26/100. Audiences polled by CinemaScore gave the film an average grade of "B" on a scale ranging from A+ to F.

More information and reviews on "Rambo: Last Blood" movie you can get on the following websites.

Rambo: Last Blood on IMDB is available at:

Rambo: Last Blood on Wikipedia is available at: