Here are "Mister America" movie trailer, plot summary, full cast and characters, release date and everything we know so far.

Is there a trailer for Mister America movie? 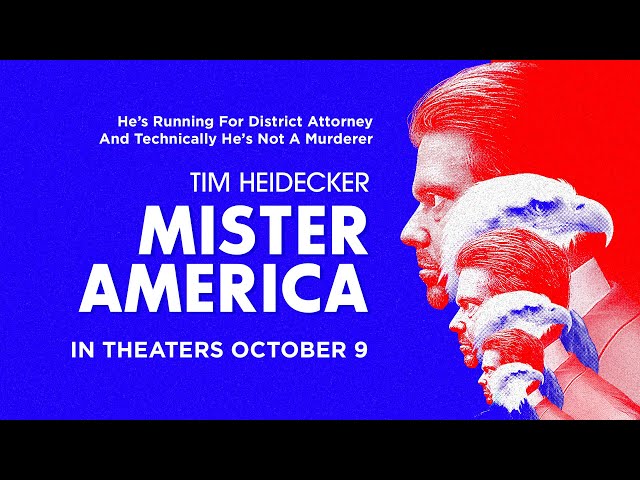 What is Mister America movie plot?

Tim Heidecker is the host of the web series On Cinema at the Cinema, where he and a cast of guests review films. After transitioning to being an electronic musician and hosting a music festival, he faces murder charges when 20 people overdose and die at the event and an additional 156 are hospitalized. He ends up beating the charge with a hung jury mistrial and sets out to become district attorney of San Bernardino County, despite not being an attorney or a resident of San Bernardino and to take revenge on Vincent Rosetti, the prosecutor of his case.
The film begins with a small crew following Heidecker going door to door to drum up enough signatures for him to be on the ballot as a third party candidate. He works with his campaign manager Toni Newman (Terri Parks), who was also the sole juror to not find Heidecker guilty at his murder trial. The duo have an ad campaign made up of social media posts and yard signs mocking Rosetti as a rat and Heidecker briefly confronts him on camera before the D.A. drives away with no comment. Heidecker starts to crack under the pressure, excessively drinking and using the TCH vape system that previously addicted him and was responsible for killing the youth at his music festival.
Newman attempts to get press coverage that falls through at the last minute, fails to buy an ad in the local paper on time, and attempts to stage a debate where neither of Heidecker's opponents attend. Among the six crowd members is Heidecker's frequent guest host from On Cinema at the Cinema, Gregg Turkington. Turkington reaches out to the film crew to convince them to abandon the project and see Heidecker as a criminal and failure who has no passion for film. Heidecker has a meltdown and storms out of the event. Even though he and Newman forge several signatures, his name does not appear on the ballot and Rosetti is re-elected.

Who plays who in the Mister America movie?

Here is the full cast and characters of "Mister America" movie. Actors and actresses are sorted mostly in credits order.

"Mister America" movie release date was scheduled to be on October 4, 2019 (Beyond Fest) and on October 9, 2019 (United States) distributing by Magnolia Pictures and Mongrel Media.

What are Mister America filming details?

"Mister America" movie is rated "R", according to the MPAA film rating system.

What are critics and audiences saying about Mister America movie?

More information and reviews on "Mister America" movie you can get on the following websites.

Mister America on IMDB is available at:

Mister America on Wikipedia is available at: