Is there a trailer for Irresistible movie?

Focus Features on Thursday, January 23, 2020 released the trailer for "Irresistible" you can watch here:
IRRESISTIBLE - Official Trailer - In Theaters and On Demand June 26. 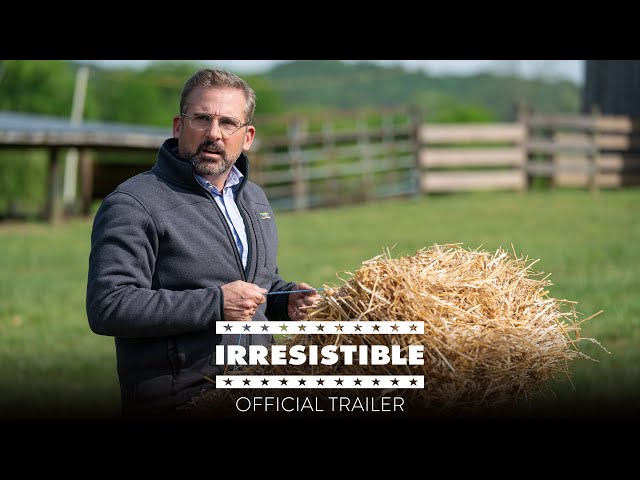 What is Irresistible movie plot?

Here is a short review of "Irresistible" movie plot summary.

Plunged into despair by the results of the 2016 presidential election, veteran Democratic Party campaign consultant Gary Zimmer (Steve Carell) is shown a viral video of retired Marine (Chris Cooper) Col. Jack Hastings giving a speech standing up for the undocumented immigrant population of his hometown of Deerlaken, Wisconsin. Calculating that getting Hastings elected as a Democrat in Deerlaken's upcoming mayoral election will help him convince the American people in the heartland to vote Democrat in the next presidential election, Zimmer travels to Wisconsin to persuade Hastings to run. Arriving in Deerlaken, Gary experiences the vast cultural divide between his home of Washington, D.C. and the townspeople's more rural mannerisms and political beliefs.
Gary soon meets Hastings and his daughter Diana (Mackenzie Davis) and pitches his idea. Hastings initially declines, considering himself more of a conservative and having no real interest in politics, but later relents and agrees to run under the condition that Gary serve as his campaign manager. Hastings recruits his friends and neighbors as volunteers for the campaign. However, setbacks soon arise such as limited Wi-Fi, xenophobia, social conservatism, and the fact that the incumbent mayor, Braun, is being funded by the Republican National Committee. The RNC also sends down Faith Brewster (Rose Byrne), Gary's nemesis, to counter Gary.
As the race heats up, Gary takes Jack to New York City so they can recruit fundraisers for the campaign to match Faith's money and resources. Jack gives a powerful speech to the possible donors about how he needs their help for his small town, which inspires Gary. Their donations allow Gary to upgrade their campaigning methods. Soon the election polls show the two candidates neck-and-neck, although the Hastings campaign takes a dive when one of Gary's team members advertises a pro-contraceptive platform to a group of single women who turn out to be nuns. When Gary starts berating his teammates, Diana convinces him to apologize and that if he is going to run her father's campaign, he needs to be nice.

Who plays who in the Irresistible movie cast?

Here is the full cast and characters of "Irresistible" movie. Actors and actresses are sorted mostly in credits order.

When is Irresistible movie release date?

What are Irresistible filming details?

"Irresistible" movie is rated "R", according to the MPAA film rating system.

What are critics and audiences saying about Irresistible movie?

More information and reviews on "Irresistible" movie you can get on the following websites.

Irresistible on IMDB is available at:

Irresistible on Wikipedia is available at: