Is there a trailer for Shirley movie?

NEON on Friday, May 08, 2020 released the trailer for "Shirley" you can watch here:
SHIRLEY Trailer - Available Everywhere June 5. 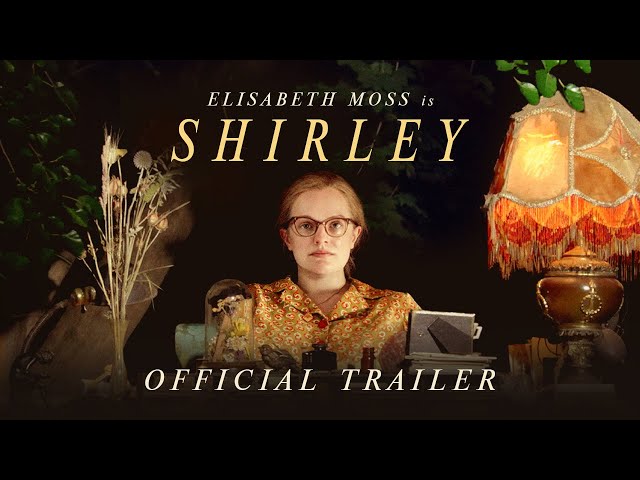 What is Shirley movie plot?

Here is a short review of "Shirley" movie plot summary.

Fred (Logan Lerman) and Rose Nemser (Odessa Young) are newlyweds relocating to Bennington College for Fred's job as a lecturer. Fred is about to work for Stanley (Michael Stuhlbarg) Hyman while Rose, still a student, is already enthralled by the work of Stanley's wife, Shirley Jackson (Elisabeth Moss), writer of "The Lottery," the dark short story which shocked readers of The New Yorker Magazine when it was published on June 26, 1948.
Minutes after their first meeting, Shirley asks Rose about her (not yet announced) pregnancy, saying "I'm a witch, didn't you know?" Soon after, Stanley asks Rose to help with menial jobs around the house because Shirley is struggling to write after yet another bout of agoraphobia. Fred and Rose reluctantly assent and move into the house. Rose realizes that she has unwittingly agreed to serve as the family housekeeper and drudge. She also sees the pathology of Stanley and Shirley's marriage: in his worship of Shirley's genius as a writer, Stanley enables her drinking and her lethargy; in turn, Shirley tolerates Stanley's posturing and pomposity, and she winks at his serial affairs.
The Nemsers move into the Jackson-Hyman house. Shirley is deliberately dismissive of and even cruel to Rose, who has apparently given up on her studies in order to manage the household. Shirley begins to write again, announcing a new work based on Paula Jean Welden (Alexandria Sherman), a young woman who recently disappeared from Bennington's campus. Stanley is obsessive and controlling about Shirley's writing process; he asserts that she's a genius, but he wheedles and cajoles her to stay on task. Despite her initial harsh treatment of Rose, Shirley begins to think of the younger woman as somewhat of a muse. Shirley opens up to Rose, having her do research for the new book, including stealing the medical files for Paula Jean Welden. As the two grow closer, Rose falls more and more under Shirley's spell. She is enraptured by and protective of Shirley. A sexual flirtation builds between them, but is never acknowledged or consummated by the two.

Who plays who in the Shirley movie cast?

Here is the full cast and characters of "Shirley" movie. Actors and actresses are sorted mostly in credits order.

When is Shirley movie release date?

What are Shirley filming details?

"Shirley" movie is rated "R", according to the MPAA film rating system.

What are critics and audiences saying about Shirley movie?

More information and reviews on "Shirley" movie you can get on the following websites.

Shirley on IMDB is available at:

Shirley on Wikipedia is available at: