Is there a trailer for Uncut Gems movie? 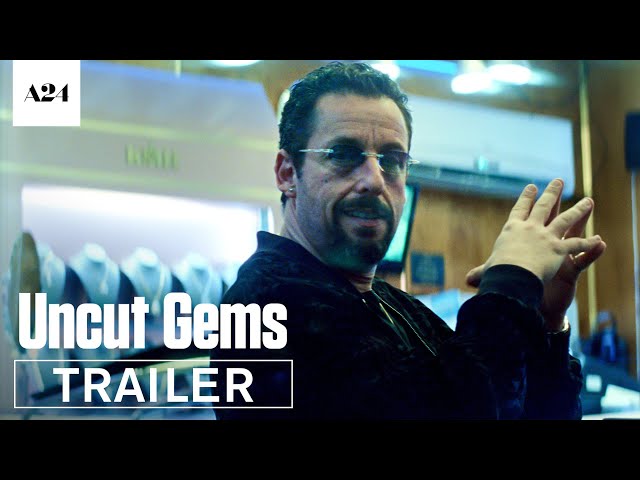 What is Uncut Gems movie plot?

In 2010, Ethiopian Jewish miners retrieve a rare black opal from the Welo mine in Ethiopia. In 2012, gambling addict Howard Ratner (Adam Sandler) runs KMH, a jewelry store in New York City's Diamond District. Howard struggles to pay off gambling debts, including $100,000 he owes to Arno (Eric Bogosian), his loan shark brother-in-law. His domestic life is split between Dinah (Idina Menzel), his estranged wife who has agreed to a divorce after Passover, and his girlfriend Julia (Julia Fox), a KMH employee.
Howard's business associate Demany (LaKeith Stanfield) brings basketball star Kevin Garnett to KMH. While he is there, the opal arrives, which Howard has smuggled from Africa. Garnett becomes obsessed with it, insisting on holding onto it for good luck at his game that night. Howard reluctantly agrees, accepting Garnett's 2008 NBA Championship ring as collateral.
Immediately after Garnett leaves, Howard pawns the ring and places a six-way parlay on Garnett playing extraordinarily well in that night's game, which he does. The next day, however, Demany says that Garnett still has the opal, angering Howard. Howard's bet should net him $600,000, but he is ambushed at his daughter's school play by Arno and his goons Phil (Keith William Richards) and Nico (Tommy Kominik). Arno reveals that he placed a stop on Howard's bet as it was made with money owed to him. Phil and Nico strip Howard naked and lock him in the trunk of his car, forcing him to call Dinah for help.
Howard meets Demany at a party hosted by R&B singer The Weeknd (La Mar Taylor) to retrieve the opal, only to find that Garnett still has it. Howard discovers Julia snorting cocaine together in a bathroom with The Weeknd, and gets into a fight with him. Feeling betrayed, Howard demands that Julia move out of his apartment. After an awkward Passover dinner, Dinah rejects Howard's plea to give their marriage another chance.

Who plays who in the Uncut Gems movie?

Here is the full cast and characters of "Uncut Gems" movie. Actors and actresses are sorted mostly in credits order.

"Uncut Gems" movie release date was scheduled to be on August 30, 2019 (Telluride, Telluride Film Festival) and on December 13, 2019 (United States) distributing by A24 (United States) and Netflix (International).

What are Uncut Gems filming details?

"Uncut Gems" movie is rated "R", according to the MPAA film rating system.

What are critics and audiences saying about Uncut Gems movie?

"Uncut Gems" movie got high rating from critics. IMDB rating is 7.4/10. Rotten Tomatoes rating is 92/100. Audiences polled by CinemaScore gave the film an average grade of "C+" on a scale ranging from A+ to F.

More information and reviews on "Uncut Gems" movie you can get on the following websites.

Uncut Gems on IMDB is available at:

Uncut Gems on Wikipedia is available at: