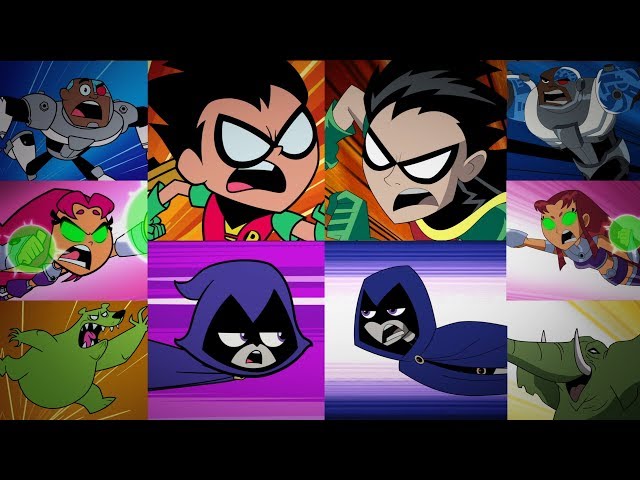 The film opens with the Teen Titans Go! team battling the Gentleman Ghost as he attempts to rob a bank. He manages to possess Robin and then Starfire (Hynden Walch), but when attempting the same trick on Raven (Tara Strong), he unintentionally cracks her gem, which unleashes some of her inner demonic power and results in his defeat. Trigon (Kevin Michael Richardson) reveals that Raven's demonic half is slowly taking over her and offers to take it away, but she refuses to give it to him.
Suddenly, the Titans are abducted by the Master of Games (Rhys Darby), a being who explores the multiverse with his Worlogog to find the best versions of particular heroes. He pits the 2013 Titans against the original 2003 animated Titans, who agree to fight after the Master of Games threatens to destroy their Earths. 2003 Robin and Cyborg (Khary Payton) manage to take out all of the 2013 Titans with the exception of Raven. She is coerced into unleashing her demonic power against the 2003 Raven, who snaps her out of it when she realizes the Master of Games is siphoning her demonic energy. The Master of Games then reveals himself to be 2013 Trigon, who uses Raven's energy to resurrect 2003 Trigon. The two Trigons kidnap the Ravens and escape to the 2003 Earth to finish absorbing 2013 Raven's powers so they can conquer the multiverse.
The two Titans teams agree to work together to stop the Trigons and rescue their Ravens. 2003 Robin deduces that the Trigons are using a Worlogog from their Earth to travel between dimensions, so they need a Worlogog from the 2013 dimension, which the 2013 Titans realize belongs to Santa Claus (Robert Morse). The two teams battle Santa and Mrs. Claus and escape by using the device to travel between dimensions and eventually make it to the 2003 Earth just after 2003 Trigon completely absorbs 2013 Raven's powers. Fed up with his counterpart's insults, 2013 Trigon consumes 2003 Trigon and transforms into a new powerful being named Hexagon.

Here is the full cast and characters of "Teen Titans Go! vs. Teen Titans" movie. Actors and actresses are sorted mostly in credits order.

The duration of the film is 77 minutes. The film's budget is TBA.

More information and reviews on "Teen Titans Go! vs. Teen Titans" movie you can get on the following websites.