Is there a trailer for Black Friday movie? 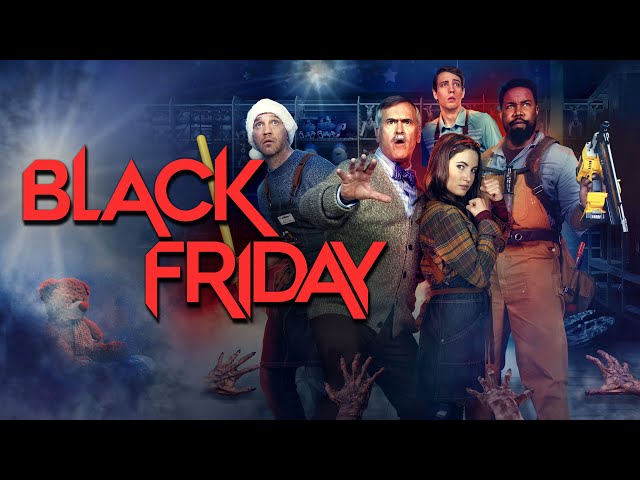 What is Black Friday movie plot?

A parasitic organism attacks All-Mart employee Monty (Lonnie Farmer) as he prepares the store for its Black Friday sale. Monty mutates into a monster and attacks two coworkers.
Because he has to work on Thanksgiving, Ken Bates (Devon Sawa) drops off his daughters Lyla (Ripley Thibeault) and Gracie (Matea Thibeault) for dinner with their mother and her new husband Grant. Ken then picks up his nebbish coworker Chris Godecki (Ryan Lee) and drives to their late shift at We Love Toys. While anxious shoppers assemble outside, Ken and Chris join coworkers Marnie (Ivana Baquero), Brian (Stephen Peck), Archie (Michael Jai White), Ruth (Ellen Colton), Emmett (Louie Kurtzman), Anita (Celeste Oliva), and Bircher (Stanley Bruno) as they get ready to open the store for Black Friday. Bircher accidentally locks himself outside the building while smoking a cigarette. Possessed by a parasite, a rabid shopper mauls Bircher, causing him to transform into a creature too.
Store manager Jonathan Wexler (Bruce Campbell) has his employees open the doors. Shoppers pour in, but they gradually turn violent as the parasitic mutation spreads. Everyone eventually realizes that the shoppers are transforming into murderous creatures as they are attacked and forced to fight back. Possessed by a parasite, Emmett emits a tentacle that kills Anita. Emmett turns into a creature before fleeing toward the store's Santa's Village display.
Ruth holes up in the office while Archie leads Chris and Brian through a mutant horde to close an exit door before more shoppers get inside. Jonathan and Ken battle a creature in the bathroom. Marnie sneaks into Santa's Village and sees that transformed shoppers are being assimilated into a growing sac. Once the exit door is secured, Jonathan, Ken, Chris, Marnie, Brian, Archie, and Ruth regroup on the store floor. Driven by a possessed officer, a speeding police car crashes through the front window. The car runs over Ruth. Mutating shoppers begin pouring inside again. After he rescues Chris, one of the monsters kills Archie.

Who plays who in the Black Friday movie cast?

Here is the full cast and characters of "Black Friday" movie. Actors and actresses are sorted mostly in credits order.

What are Black Friday filming details?

What are critics and audiences saying about Black Friday movie?

More information and reviews on "Black Friday" movie you can get on the following websites.

Black Friday on IMDB is available at:

Black Friday on Wikipedia is available at: