Is there a trailer for Willy's Wonderland movie? 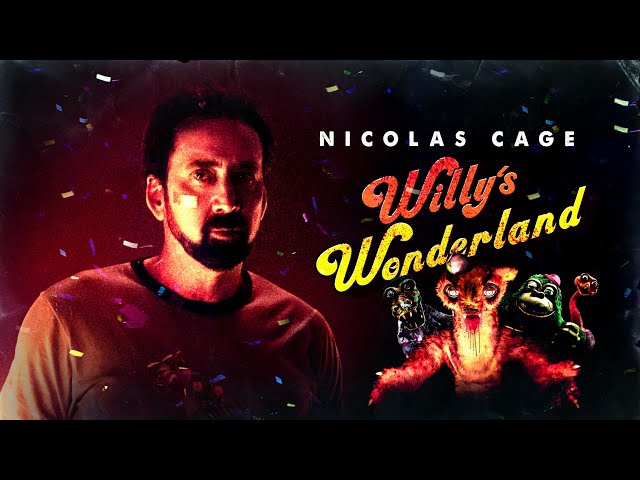 What is Willy's Wonderland movie plot?

A quiet drifter ends up stranded in remote Hayesville, Nevada, when his vehicle breaks down after running over a spike strip. He is picked up by mechanic Jed Love (Chris Warner), who takes him to Willy's Wonderland, a once-successful abandoned family entertainment center. Owner Tex Macadoo (Ric Reitz) offers him to work as a night-shift janitor in exchange for repairing his vehicle. Meanwhile, teenager Liv Hawthorne (Emily Tosta) is handcuffed by her caretaker and Hayesville's sheriff Eloise Lund (Beth Grant) due to her previous attempts to set the place on fire. When Lund leaves, Liv's friends, Chris Muley (Kai Kadlec), Kathy Barnes (Caylee Cowan), Aaron Powers (Christian Delgrosso), Bob McDaniel (Terayle Hill), and Dan Lorraine (Jonathan Mercedes), come and release her.
While the Janitor begins his cleaning duties, Tex and Jed leave until the next morning, but not before leaving him locked in the building. The restaurant's now-withered eight animatronic mascots - Willy Weasel, Arty Alligator, Cammy Chameleon (Madisun Leigh), Ozzie Ostrich, Tito Turtle (Abel Arias), Knighty Knight (Duke Jackson), Gus Gorilla (Mark Gagliardi), and Siren Sara (Jessica Graves Davis) - are revealed to be alive and aggressive. Ozzie Ostrich attacks the Janitor, who beats Ozzie to death with a mop. Meantime, Liv and her friends arrive at Willy's Wonderland, dousing the perimeter with gasoline until Liv decides to enter through the vents to get the Janitor out. Inside, the Janitor is attacked by Gus Gorilla in the restrooms; he kills Gus by curb stomping his face into a urinal. In the vents, Liv is chased by Arty Alligator but she escapes into a fairy-themed room where Siren Sara attacks her.
Liv manages to fend off Sara and encounters the Janitor, who ignores Liv's warnings about the animatronics and refuses to leave the building. Outside, the teens climb to the roof, which collapses, causing them to fall into the building. While the Janitor cleans the kitchen, Liv explains to him that Willy's Wonderland was originally owned by Jerry Robert Willis (Grant Cramer), a notorious serial killer, and his psychotic cannibal partners, who often murdered unsuspecting families for pleasure. Eventually discovered by the police, they committed a satanic ritual to transfer their souls into the animatronic characters. When she finishes, several animatronics come to life and start attacking the group.

Who plays who in the Willy's Wonderland movie cast?

Here is the full cast and characters of "Willy's Wonderland" movie. Actors and actresses are sorted mostly in credits order.

What are Willy's Wonderland filming details?

Principal photography began in February 2020 for a month in various parts of Atlanta, Georgia.

What are critics and audiences saying about Willy's Wonderland movie?

More information and reviews on "Willy's Wonderland" movie you can get on the following websites.

Willy's Wonderland on IMDB is available at:

Willy's Wonderland on Wikipedia is available at: