Is there a trailer for Crawl movie? 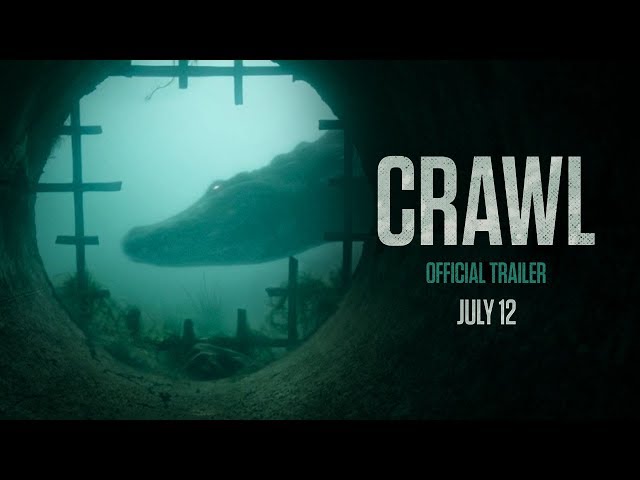 What is Crawl movie plot?

Here is a short review of "Crawl" movie plot summary.

Aspiring swimmer Haley Keller (Kaya Scodelario) receives a call from her sister Beth, who informs her that Category 5 Hurricane Wendy is on its way to Florida, and advises her to get out of the state. Concerned for the safety of her estranged father, Dave (Barry Pepper), Haley goes to check on him at his condo, but finds it empty. She decides to go check at their old family home in Coral Lake, which he supposedly sold years ago. She goes against the instructions of Beth's ex-boyfriend Wayne (Ross Anderson), who is now a member of the Florida Police Department, to not go into Coral Lake, as it is flooding quickly.
At the house, with the help of the family dog, Sugar (Cso-Cso), Haley descends into the crawl space underneath the house, eventually finding her father unconscious. As she tries to drag him out, her exit is cut off by large alligators that Dave believes got into the house via a storm drain open to the crawl space. The alligators are too large to fit under the pipes in the crawl space, allowing Haley and Dave to find safety at the back of the crawl space.
As the hurricane intensifies and the house begins to flood, Haley attempts to navigate around the alligators to retrieve her phone that she dropped, but she is ambushed by two alligators, who promptly destroy the phone and injure her leg. She tries to navigate around the basement and notices three people looting a nearby gas station. She attempts to draw their attention by activating her car's alarm, but all three are devoured by alligators. Later, Wayne and his partner Pete (Jose Palma) arrive at the old house in search of Haley and her father. Wayne heads into the house to look for them while Pete is ambushed and ripped apart by a swarm of alligators after the boat's engine gets tangled by debris. Wayne locates them as they warn him of the dangers in the basement. Wayne tries to radio Pete for assistance, but he is pulled into the basement by an alligator. Haley tries to save Wayne, but the alligator drags him underwater and devours him. In a last-ditch effort to escape, Haley swims to the storm drain where she discovers that the alligators have made their nest and laid eggs, while Dave kills another alligator with a shovel.

Who plays who in the Crawl movie?

Here is the full cast and characters of "Crawl" movie. Actors and actresses are sorted mostly in credits order.

When is Crawl movie release date?

What are Crawl filming details?

"Crawl" movie is rated "R", according to the MPAA film rating system.

Principal photography began in August 2018 in Belgrade, Serbia, and wrapped up the following month.

What are critics and audiences saying about Crawl movie?

"Crawl" movie got high rating from critics. IMDB rating is 6.1/10. Rotten Tomatoes rating is 84/100. Audiences polled by CinemaScore gave the film an average grade of "B" on a scale ranging from A+ to F.

More information and reviews on "Crawl" movie you can get on the following websites.

Crawl on IMDB is available at:

Crawl on Wikipedia is available at: