Is there a trailer for Dark Waters movie? 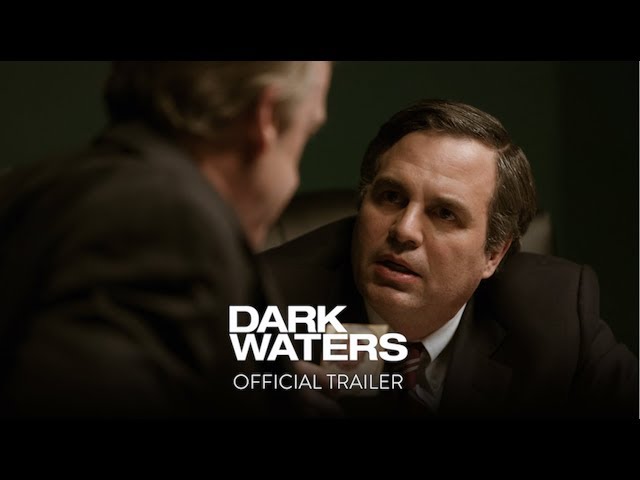 What is Dark Waters movie plot?

Robert Bilott (Mark Ruffalo) is a corporate defense lawyer from Cincinnati, Ohio working for law firm Taft Stettinius & Hollister. Farmer Wilbur Tennant (Bill Camp), who knows Robert's grandmother, asks Robert to investigate a number of unexplained animal deaths in Parkersburg, West Virginia. Tennant connects the deaths to the chemical manufacturing corporation DuPont, and gives Robert a large case of videotapes.
Robert visits the Tennants' farm, where he learns that 190 cows have died with unusual medical conditions such as bloated organs, blackened teeth, and tumors. DuPont attorney Phil Donnelly (Victor Garber) tells him he is not aware of the case but will help out in any way he can. Robert files a small suit so he can gain information through legal discovery of the chemicals dumped on the site. When he finds nothing useful in the EPA report, he realizes the chemicals might not be regulated by the EPA.
Robert confronts Phil at an industry event, leading to an angry exchange. DuPont sends Robert hundreds of boxes, hoping to bury the evidence. Robert finds numerous references to PFOA, a chemical with no references in any medical textbook. In the middle of the night, Robert's pregnant wife Sarah (Anne Hathaway) finds him tearing the carpet off the floors and going through their pans. He has discovered that PFOA is perfluorooctanoic acid, used to manufacture Teflon and used in American homes for nonstick pans. DuPont has been running tests of the effect of PFOA for decades, finding that it causes cancer and birth defects, but did not make the findings public. They dumped thousands of tons of toxic sludge in a landfill next to Tennant's farm. PFOA and similar compounds are forever chemicals, chemicals that do not leave the blood stream and slowly accumulate.

Who plays who in the Dark Waters movie cast?

Here is the full cast and characters of "Dark Waters" movie. Actors and actresses are sorted mostly in credits order.

What are Dark Waters filming details?

The duration of the film is 126 minutes. The film grossed over $23.1 million.

"Dark Waters" movie is rated "PG-13", according to the MPAA film rating system.

What are critics and audiences saying about Dark Waters movie?

"Dark Waters" movie got high rating from critics. IMDB rating is 7.6/10. Rotten Tomatoes rating is 89/100. Audiences polled by CinemaScore gave the film an average grade of "A-" on a scale ranging from A+ to F.

More information and reviews on "Dark Waters" movie you can get on the following websites.

Dark Waters on IMDB is available at:

Dark Waters on Wikipedia is available at: