Is there a trailer for Poms movie?

STXfilms on Thursday, February 21, 2019 released the trailer for "Poms" you can watch here:
Poms | Official Trailer | Own It Now on Digital HD, Blu-Ray & DVD. 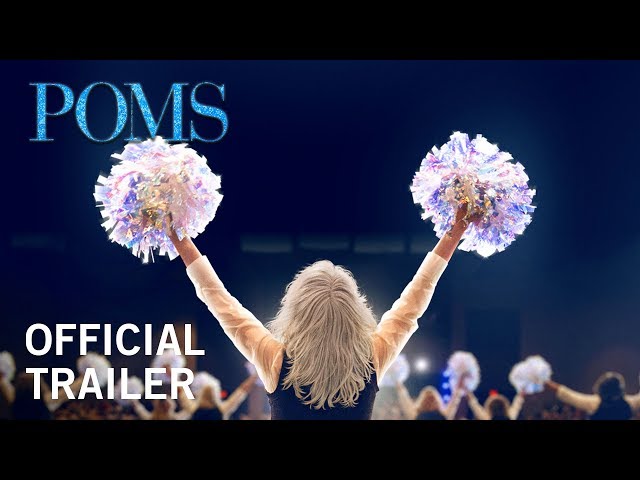 What is Poms movie plot?

Here is a short review of "Poms" movie plot summary.

Martha (Diane Keaton), a woman dying of cancer, decides to forego further treatment, and relocates from her apartment in New York to a retirement community called Sun Springs in Georgia. When Martha arrives at Sun Springs, she meets community supervisor Vicki (Celia Weston), who gives Martha a tour of the community, where she explains that every resident must belong to one of the community's clubs.
Martha moves into her new house and promptly meets her next door neighbor Sheryl (Jacki Weaver). Later at night, Martha is unable to sleep due to loud noise coming from Sheryl's house, forcing her to call the community's security chief Carl to stop the noise. But Sheryl and her party sneak into Martha's house to evade Carl, where she convinces a reluctant Martha to allow them to hide there. From that night on, Sheryl becomes interested in being Martha's friend and invites her to various activities, but Martha resists.
Martha watches a television program about fireworks being used for funerals, and makes plans to use fireworks for her own funeral. A few days later, she accepts Sheryl as a friend, and while getting to know each other, Sheryl learns that Martha was a cheerleader, where she had to quit before her first game to care for her ailing mother. Sheryl says that Martha should try to be a cheerleader again. After thinking about it, Martha goes to see Sheryl at a high school where she works as a substitute teacher and convinces Sheryl to help her start up a cheerleading club in Sun Springs.
After convincing Vicki to allow them to start the club and to recruit the minimum requirement of eight members, Martha and Sheryl hold tryouts. Six women join: Olive (Pam Grier), Alice (Rhea Perlman), Ruby (Carol Sutton), Evelyn (Ginny MacColl), Phyllis (Patricia French) and Helen (Phyllis Somerville). Martha hires Sheryl's teenage grandson Ben (Charlie Tahan) to be their DJ. As the group commences practicing, it quickly becomes difficult for them due to their age and physical conditions. When Vicki tells them they have to find a new place to practice, Sheryl reacts by getting them a spot at a pep rally at the high school. In the locker room before the rally, they get teased by a group of younger cheerleaders, particularly Chloe (Alisha Boe), one of Sheryl's students. During the pep rally, Martha's group performs okay until Helen hurts her ankle. When Helen is taken to the hospital, they discover from Ben that a video of them at the pep rally has gone viral. In addition with Helen's overbearing son Tom (David Maldonado) threatening the group with a lawsuit due to her injury, Vicki and other members of the community vote unanimously to disband the club.

Who plays who in the Poms movie cast?

Here is the full cast and characters of "Poms" movie. Actors and actresses are sorted mostly in credits order.

When is Poms movie release date?

What are Poms filming details?

"Poms" movie is rated "PG-13", according to the MPAA film rating system.

What are critics and audiences saying about Poms movie?

"Poms" movie got average rating from critics. IMDB rating is 6.1/10. Rotten Tomatoes rating is 35/100. Audiences polled by CinemaScore gave the film an average grade of "B+" on a scale ranging from A+ to F.

More information and reviews on "Poms" movie you can get on the following websites.

Poms on IMDB is available at:

Poms on Wikipedia is available at: