Is there a trailer for Roman J. Israel, Esq. movie? 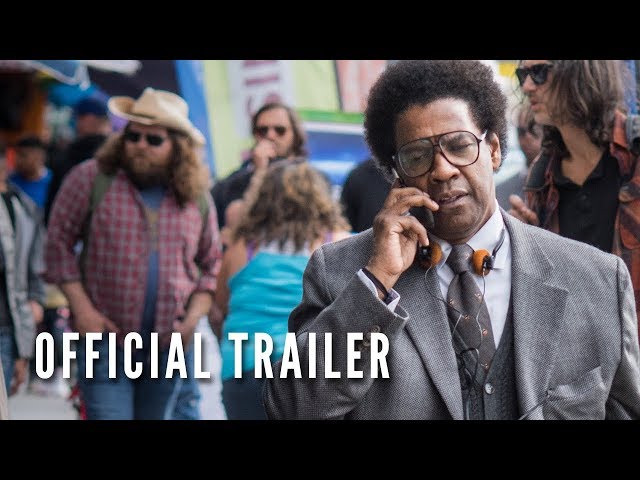 Roman J. Israel (Denzel Washington) is a lawyer earning $500 a week at a small law firm in Los Angeles. In his two-partner office, Israel is responsible for preparing briefs, often focusing on the civil rights of their defendants, while William Jackson, the firm's founder and a well-respected professor, focuses on the courtroom appearances that Israel struggles with. Israel has spent years developing a brief that he believes will bring reform to the unfair use of plea bargaining to induce guilty pleas in the justice system. Though short on social skills, Israel is gifted with a phenomenal memory as well as strong personal convictions, which he has pursued at the expense of family.
Jackson suffers a fatal heart attack. The firm is broke and will close, all to be handled by Jackson's former student, George Pierce (Colin Farrell). Pierce, who greatly admired Jackson and is impressed by Israel's legal mind, offers a job at his own large firm. Israel initially rejects this offer, believing that Pierce is simply a greedy lawyer. Israel meets Maya (Carmen Ejogo) during a job interview at a local activist network. The interview does not go well, but Maya asks him to speak at an upcoming meeting organizing a protest. Struggling to find a job elsewhere, Israel reluctantly takes up Pierce's job offer.
Israel is a poor fit at his new firm, clashing with senior partner Jesse Salinas over a joke Salinas makes about battered women. After attempting to interest Pierce in his brief, Israel is disappointed to be assigned to handle clients. One such client is Derrell Ellerbee (DeRon Horton), a young man arrested for murder, who tells Israel that he is willing to divulge the whereabouts of the actual shooter, Carter "CJ" Johnson (Amari Cheatom), and will testify against him. Israel goes behind Pierce's back to negotiate a plea deal with the district attorney. The prosecutor rejects his offer and hangs up on Israel after he insults her unsympathetic counter-offer. No deal is struck and Ellerbee is murdered as a snitch.

Who plays who in the Roman J. Israel, Esq. movie cast?

Here is the full cast and characters of "Roman J. Israel, Esq." movie. Actors and actresses are sorted mostly in credits order.

What are critics and audiences saying about Roman J. Israel, Esq. movie?

"Roman J. Israel, Esq." movie got average rating from critics. IMDB rating is 6.5/10. Rotten Tomatoes rating is 54/100. But the audience kinda likes the film. Audiences polled by CinemaScore gave the film an average grade of "B" on a scale ranging from A+ to F.

More information and reviews on "Roman J. Israel, Esq." movie you can get on the following websites.

Roman J. Israel, Esq. on IMDB is available at:

Roman J. Israel, Esq. on Wikipedia is available at: