Here are "Baywatch" movie trailer, plot summary, full cast and characters, release date and everything we know so far.

Is there a trailer for Baywatch movie? 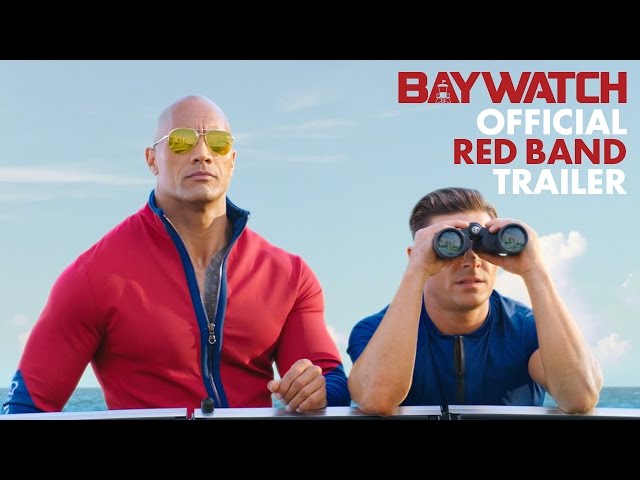 What is Baywatch movie plot?

Here is a short review of "Baywatch" movie plot summary.

In Emerald Bay, Florida, Lt. Mitch Buchannon and his team of lifeguards, including second-in-command Stephanie Holden (Ilfenesh Hadera) and veteran C.J. Parker, protect the beaches and the bay as part of an elite division known as Baywatch. Having made over 500 rescues in his career, Mitch is beloved by the community, to the annoyance of local beat cop Garner Ellerbee and Mitch's superior, Captain Thorpe (Rob Huebel). During one of his morning patrols, Mitch finds a small pouch of flakka drug washed up near the Huntley Club, which is now under the ownership of businesswoman Victoria Leeds (Priyanka Chopra), who has been secretly bribing city councilman Rodriguez and others in efforts to increase her stake in the bay.
Mitch later meets Olympian Matt Brody (Zac Efron) who, thinking his Olympic position entitles him to be on the team without trying out, says that he is already on the team. He then calls Holden in, and they tease Brody. Mitch later makes Brody beat him on the "big boys'" course. When the course ends, a mom and her kids start drowning, resulting in the lifeguards and Brody rushing to save them, even though Brody isn't a lifeguard yet. When everything's clear, the results of the tryouts are in, and the people who made it are Ronnie Greenbaum (Jon Bass), Summer Quinn (Alexandra Daddario), and Matt Brody.
When a private yacht catches fire, Brody disobeys orders and dives directly under the flames, causing Holden and C. J. to have to save him. The occupants are evacuated, except for the deceased councilman Rodriguez. Ellerbee disapproves of Mitch's further investigative actions. Mitch and the gang attend a party held by Leeds to investigate about the flakka, but without much luck, as Brody makes a fool of himself getting drunk. Mitch, Brody, and Summer later infiltrate the hospital morgue, where they record two of Leeds' henchmen planting a falsified autopsy report to cover up the fact that Rodriguez was murdered on her orders. Unfortunately, they are discovered, and though Mitch manages to subdue and capture one of them, the recording is destroyed and Ellerbee is forced to release their suspect on a lack of evidence. Angered, Thorpe threatens to fire Mitch if he oversteps his authority again.

Who plays who in the Baywatch movie?

Here is the full cast and characters of "Baywatch" movie. Actors and actresses are sorted mostly in credits order.

When is Baywatch movie release date?

What are Baywatch filming details?

"Baywatch" movie is rated "R", according to the MPAA film rating system.

Principal photography began on February 22, 2016, in Deerfield Beach, Florida, with the setting in Broward County, Florida, while the TV series was set in Malibu, California.

What are critics and audiences saying about Baywatch movie?

"Baywatch" movie got average rating from critics. IMDB rating is 5.5/10. Rotten Tomatoes rating is 17/100. But the audience kinda likes the film. Audiences polled by CinemaScore gave the film an average grade of "B+" on a scale ranging from A+ to F.

More information and reviews on "Baywatch" movie you can get on the following websites.

Baywatch on IMDB is available at:

Baywatch on Wikipedia is available at: