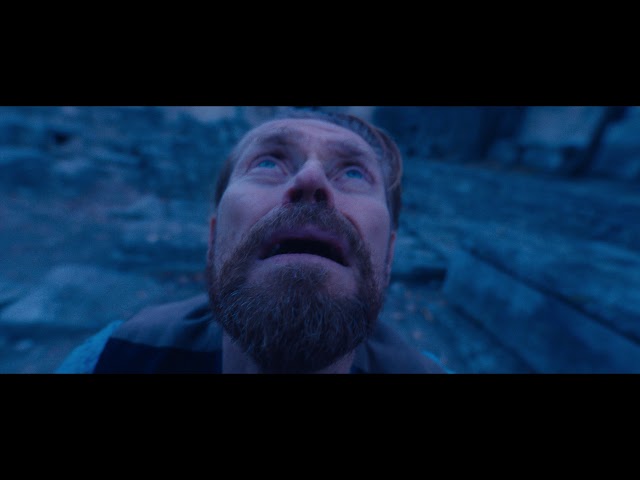 Vincent van Gogh (Willem Dafoe) seems to always be in artistic and emotional exhaustion. He is occasionally enraptured by his aesthetic responses to the landscapes around Arles; he renders them in oil on canvas or in a sketch pad using his own style of creating his work in a single, rapid sitting. When not in the countryside, he paints inside a yellow room in a yellow house. He begins to contemplate the fleeting nature of some subjects of still life. He also thinks about seasonal flowers and the artistic process which renders a permanent and eternal quality to the representation of flowers on canvas, which does not wilt and wither.
For a while, Vincent's preferred medium becomes a large sketchbook given to him by Madame Ginoux which he begins to fill with renderings of landscapes in pen and ink. He continues to ponder various philosophical and existential questions such as his desire "not to see a landscape but only the eternity behind it", and that "there cannot be such a thing as nature without there also being a meaning to nature." He wishes to devote increasing time to rendering the landscapes. A group of schoolchildren and their teacher mock Vincent and his work and he chases them away. The teacher and her students call him crazy as they run away in fear. On his walk home some boys throw rocks at him. When he chases the boys some townsmen subdue him and report him to the local psychiatric hospital. His brother Theo is called to Arles from Paris, who in turn convinces Paul Gauguin (Oscar Isaac) to agree to visit Vincent. Gauguin soon arrives in Arles.

Who plays who in the At Eternity's Gate movie cast?

"At Eternity's Gate" movie got high rating from critics. IMDB rating is 7/10. Rotten Tomatoes rating is 79/100. The audience also likes the film.