Is there a trailer for Alpha movie? 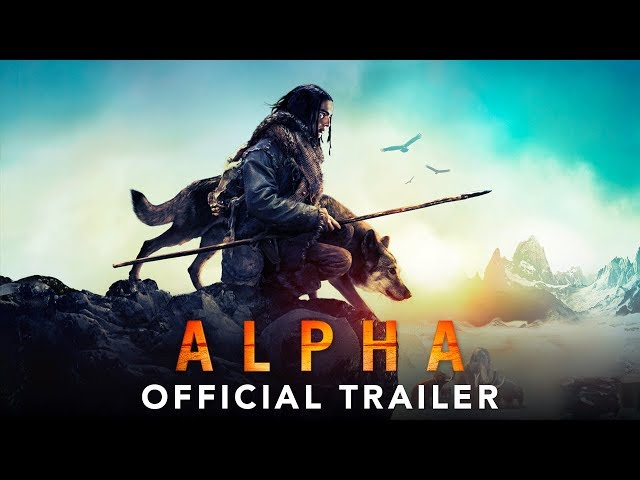 What is Alpha movie plot?

Here is a short review of "Alpha" movie plot summary.

In Upper Paleolithic Europe 20,000 years ago, a small tribe of hunter-gatherers prepare for a hunting expedition to hunt for the coming winter's food. Tau (Jóhannes Haukur Jóhannesson), its chief, trains his teenage son Keda (Kodi Smit-McPhee), accepting him and Keda's friend Kappa (Spencer Bogaert) to join the hunting party. His wife Rho (Natassia Malthe) worries that Keda is not ready, but Tau believes he is and the hunters set out.
Tau tests Keda by having him kill a wild boar they've caught, but Keda hesitates. One night, the party's fire draws the attention of a large cave lion, which lunges through their circle, snatching Kappa before anyone can do anything. Hearing the fatal struggle in the darkness, the tribe gives him up for dead. Kappa is given a memorial service in the form of a cairn to symbolize the passing of one's spirit to the afterlife.
The hunters eventually reach a herd of steppe bison, which they attempt to stampede off a cliff with relative success. Amidst the chaos, the bull rushes towards Keda and tosses him over the edge, leaving him gripping the rough cliff edge with his hand. Keda loses his grip and plummets to a further ledge where he appears to break his leg and is knocked unconscious. Tau attempts to climb down to him, but he is stopped by fellow hunter Sigma (Marcin Kowalczyk) who assures him in good faith that Keda is dead and there would be no way to reach him anyway. The tribe leaves and Tau performs another funeral ritual, stricken with grief.
Keda is awoken by a vulture who mistakes him for dead. He kills the bird by wringing its neck and tries to climb the rest of the way down the cliff. A sudden heavy rainfall causes the ravine below to flood. Losing his grip, Keda falls into the water. He survives and splints his injured foot before returning to the top of the cliff. Seeing the memorial cairn left by his tribe, he realizes he must travel back to the village by himself.

Who plays who in the Alpha movie cast?

Here is the full cast and characters of "Alpha" movie. Actors and actresses are sorted mostly in credits order.

Kodi Smit-McPhee  as Keda
Jóhannes Haukur Jóhannesson  as Tau
Natassia Malthe  as Rho
Marcin Kowalczyk  as Sigma
Jens Hultén  as Xi
Leonor Varela  as Shaman Woman
Mercedes de la Zerda  as Nu
Spencer Bogaert  as Kappa
Morgan Freeman  as Narrator (in the cut of the film released in the United Kingdom and Ireland; as released in the U.S. Morgan Freeman has no role and there as no voice-over narration)

When is Alpha movie release date?

What are Alpha filming details?

"Alpha" movie is rated "PG-13", according to the MPAA film rating system.

What are critics and audiences saying about Alpha movie?

"Alpha" movie got high rating from critics. IMDB rating is 6.7/10. Rotten Tomatoes rating is 80/100. The audience also likes the film. Audiences polled by CinemaScore gave the film an average grade of "B+" on a scale ranging from A+ to F.

More information and reviews on "Alpha" movie you can get on the following websites.

Alpha on IMDB is available at:

Alpha on Wikipedia is available at: