Here are "First Reformed" movie trailer, plot summary, full cast and characters, release date and everything we know so far.

Is there a trailer for First Reformed movie?

A24 on Thursday, March 29, 2018 released the trailer for "First Reformed" you can watch here:
First Reformed | Official Trailer HD | A24. 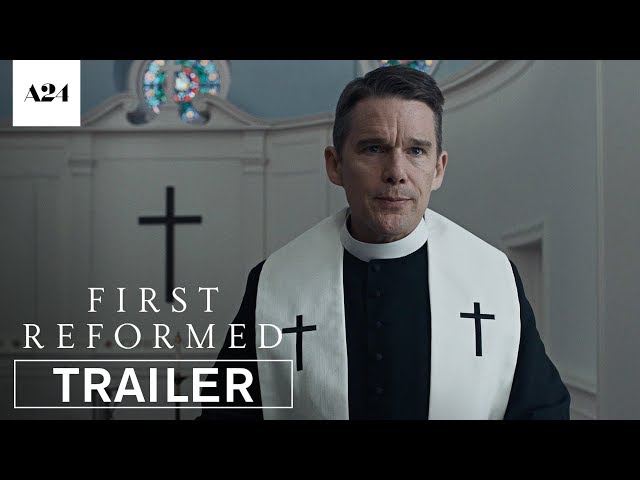 What is First Reformed movie plot?

Ernst Toller (Ethan Hawke) is the pastor of the First Reformed Church in Snowbridge, New York, who is struggling with a crisis of faith. The film opens with him writing down his thoughts in a journal, which he plans to keep for a year, and then destroy. He leads a 250-year-old Dutch Reformed Church which was once a stop on the Underground Railroad. It faces dwindling attendance under Toller's leadership, which has taken the church away from its historical focus on Calvinist theology; it now serves mostly as a tourist attraction. Toller, a former military chaplain, is also struggling with the death of his son Joseph, who was killed in the Iraq War, and with alcoholism. Toller seeks a deeper spiritual understanding through reading Roman Catholic writers (G. K. Chesterton and Thomas Merton) and mystical books (The Cloud of Unknowing). This leads him to seek support from Abundant Life, the evangelical megachurch in Albany that owns First Reformed.
He is approached by Mary (Amanda Seyfried), who is seeking counseling for Michael (Philip Ettinger), her radical-environmentalist husband. Michael further challenges Toller's beliefs: he explains that he wants Mary to get an abortion, because he does not want to bring a child into a world that will be rendered almost uninhabitable by climate change. Mary finds a suicide vest belonging to her husband in their garage. Toller takes it, promising to counsel Michael about it. Mary and Toller discuss going to the police, but Toller feels it would worsen Michael's state. Just before their next appointment, Michael sends Toller a text message asking to meet in a local park. Toller arrives to find Michael dead of a self-inflicted shotgun wound. In accordance with Michael's will and testament, a service is held at a local toxic-waste dump, where his ashes are scattered.

Who plays who in the First Reformed movie?

Here is the full cast and characters of "First Reformed" movie. Actors and actresses are sorted mostly in credits order.

What are First Reformed filming details?

The duration of the film is 113 minutes. With a budget of $3.5 million, the film grossed over $4 million.

"First Reformed" movie is rated "R", according to the MPAA film rating system.

What are critics and audiences saying about First Reformed movie?

More information and reviews on "First Reformed" movie you can get on the following websites.

First Reformed on IMDB is available at:

First Reformed on Wikipedia is available at: