Is there a trailer for Hot Tub Time Machine 2 movie? 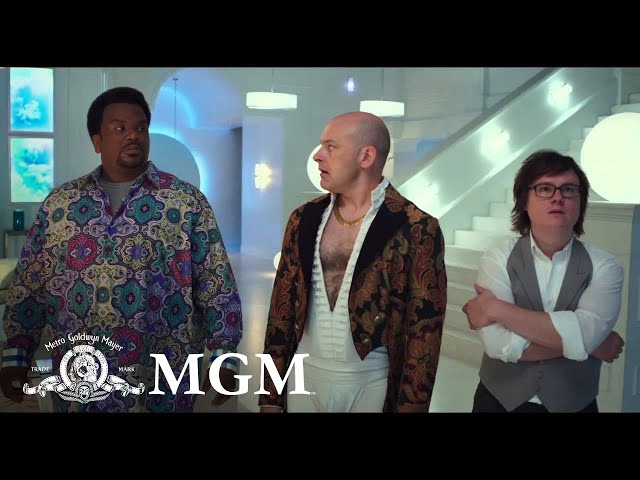 Five years after the events of the first film, Lou Dorchen (Rob Corddry) and Nick Webber (Craig Robinson) have become rich and famous, with Lou becoming a billionaire and Nick being a successful musician/singer. At Lou's celebratory party, Lou is shot in the groin. Jacob (Clark Duke) and Nick drag him to the hot tub time machine and activate it to travel back in time to find and stop the killer. When they awaken they find themselves ten years in the future, where Jacob is in charge of Lou's mansion. After determining that they are in an alternate timeline where Lou's killer is from this future, they go to their friend Adam Yates's home, only to meet his son Adam Yates Stedmeyer (Adam Scott) who is engaged to a girl named Jill (Gillian Jacobs).
Lou suspects his nemesis Gary Winkle (Jason Jones) is the killer, but he learns Gary actually made his own fortune from some land that Lou could have purchased. They party at Gary's nightclub, where Adam Jr. takes hallucinogens for the first time. The next day, they attend the popular television game show Choozy Doozy, where contestant Nick is required to have virtual reality sex with a man. As Lou suggested the idea, he is obliged to participate, but uses his "lifeline" to switch with Adam Jr. Jacob becomes disillusioned with the misadventures and leaves the group to get drunk at Gary's club and to then commit suicide by jumping off an extremely high building. Lou makes amends with him and prevents his suicide.
When the guys see a news report where Brad (Kumail Nanjiani), an employee of Lougle, invents nitrotrinadium, the ingredient that activates the hot tub time machine, they suspect he is the killer. At Adam Jr's wedding, Jacob talks with Brad and realizes he is not the killer but that he invented the chemical after being inspired by Lou's words. Jill, who is upset about Adam Jr's partying, has sex with Lou, but when Adam Jr. finds out, he steals the nitrotrinadium and goes back to the past. Jacob, Nick and Lou return to the mansion, but are too late to stop Adam Jr. As the guys sit in defeat, Jacob realizes that because the chemical has appeared in the past, it now exists in the future. They return to the present and stop Adam Jr. from shooting Lou after Lou apologizes to him.

Who plays who in the Hot Tub Time Machine 2 movie?

Here is the full cast and characters of "Hot Tub Time Machine 2" movie. Actors and actresses are sorted mostly in credits order.

What are critics and audiences saying about Hot Tub Time Machine 2 movie?

"Hot Tub Time Machine 2" movie got average rating from critics. IMDB rating is 5.1/10. Rotten Tomatoes rating is 13/100. Audiences polled by CinemaScore gave the film an average grade of "C-" on a scale ranging from A+ to F.

More information and reviews on "Hot Tub Time Machine 2" movie you can get on the following websites.

Hot Tub Time Machine 2 on IMDB is available at:

Hot Tub Time Machine 2 on Wikipedia is available at: