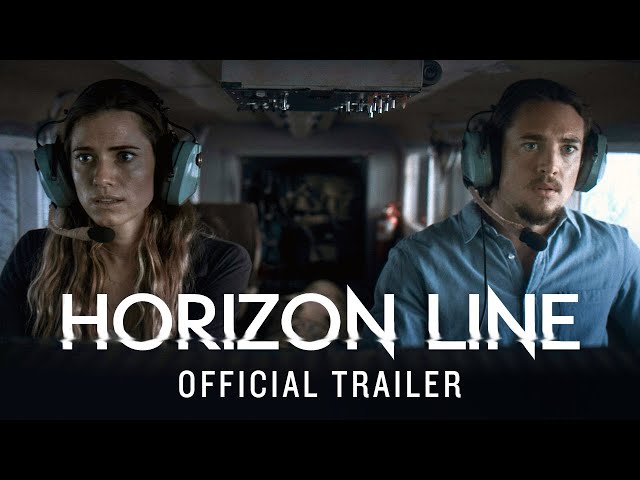 What is "Horizon Line" about?

Jackson (Alexander Dreymon) and Sara (Allison Williams) board a Caribbean local flight piloted by Sara's friend Wyman (Keith David). Wyman invites Sara to the co-pilot seat while Jackson sleeps in the main cabin. During the flight Wyman has a heart attack and passes away sending the plane into freefall. Sara and Jackson recover but the autopilot is damaged and they are faced with the fact that Sara will need to fly the plane to get them to safety.
They manage to contact Pascale (Pearl Mackie) on the shortwave radio and he attempts to guide them to safety but they have to fly through a storm first. They manage to get through the storm but not before they damage their compass. The plane is also starting to lose fuel at an alarming rate. Jackson volunteers to climb out of the plane and try and patch their fuel line. While successful he breaks his arm. Sara realises Wyman has some back-up fuel on the plane and she attempts to manually refuel the plane by climbing out the window.
Sara manages the temporary refuelling and climbs back into the plane. They try and raise Pascale but the radio is silent. As the plane runs out of fuel they spot a small island and attempt to glide the stricken plane to the island. The plane crashes into the sea and flips. Sara and Jackson barely escape and swim to the barren island.
Sara and Jackson make it to the island only to discover it is a sandbar and will shortly disappear as the tide rises. As the sand bar disappears, they try and stay afloat but Jackson sensing he is sure to die offers Sara his life vest. Sara declines telling him they are a team. Jackson professes his love for Sara as they sense the end is near but just then a fishing vessel that heard their radio transmission arrives to rescue them.

Who's in the "Horizon Line" cast?

Here is the full cast and characters of "Horizon Line". Actors and actresses are sorted mostly in credits order.

When is "Horizon Line" released in cinemas?

What are "Horizon Line" film specifications?

What are critics and audiences saying about "Horizon Line"?

"Horizon Line" got average rating from critics. IMDB rating is 5.1/10.

Other sites about "Horizon Line"

More information about "Horizon Line" you can get at: