Is there a trailer for Cherry movie? 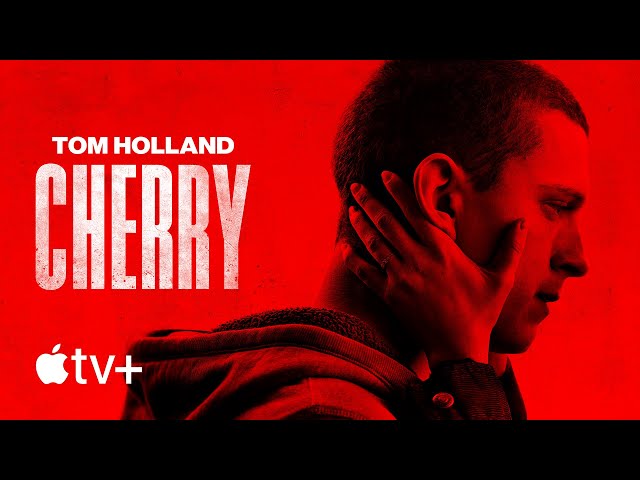 What is Cherry movie plot?

Here is a short review of "Cherry" movie plot summary.

Cherry (Tom Holland) falls in love at first sight with his college classmate Emily (Ciara Bravo). Their relationship blossoms but Emily decides to leave and study in Montreal. Cherry is devastated and enlists in the Army as a medic to escape his heartbreak. Just before he is about to leave for basic training, Emily realizes her mistake and confesses she is in love with Cherry too and that they are meant for one another. Cherry and Emily marry before his deployment.
During his two year service in the Army, Cherry suffers from PTSD after having several horrific experiences, including seeing his friend, Jimenez (Jeff Wahlberg), burnt and killed from an IED. To cope with his panic attacks and severe anxiety when he comes home, he abuses OxyContin, prescribed from a doctor helping to decrease his PTSD symptoms. His growing addiction begins to frustrate Emily and as a result, she begins taking Cherry's medication to deal with her own frustration of not knowing how to support him without drugs and the two soon become addicted to OxyContin, and eventually heroin.
After they break into a safe that he was looking after from his drug dealer, Pills and Coke (Jack Reynor), he and Emily use most of the drugs secured inside for themselves. Some time later, Pills and Coke visits and sees the empty safe. Cherry learns that his drug dealer's boss, Black, is the owner of the safe and will kill all three of them for this. To get the money for the drugs they used, Cherry robs a bank and pays back the money. To support his and Emily's addiction, Cherry continues to rob banks. As a result of their daily heroin use, Cherry continues to rob banks frequently after he and Emily go through severe withdrawals. Emily overdoses and almost dies in a hospital. Cherry is guilted by Emily's mother to leave her alone.

Who plays who in the Cherry movie cast?

Here is the full cast and characters of "Cherry" movie. Actors and actresses are sorted mostly in credits order.

When is Cherry movie release date?

"Cherry" movie release date was scheduled to be on February 26, 2021 (United States) distributing by Apple TV+.

What are Cherry filming details?

The duration of the film is 141 minutes. The film's budget is $40 million.

"Cherry" movie is rated "R", according to the MPAA film rating system.

More information and reviews on "Cherry" movie you can get on the following websites.

Cherry on IMDB is available at:

Cherry on Wikipedia is available at: