Is there a trailer for Zola movie? 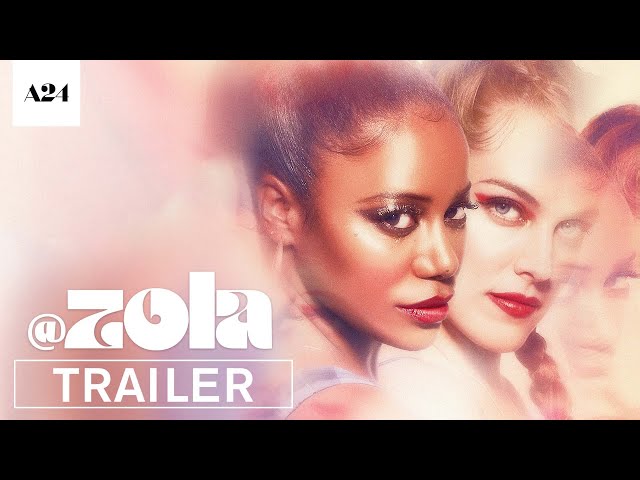 What is Zola movie plot?

Here is a short review of "Zola" movie plot summary.

Aziah "Zola" King (Taylour Paige), a self-assured waitress and part-time stripper in Detroit, meets Stefani (Riley Keough), an outgoing and crass fellow stripper, while serving her at work. Stefani invites Zola to dance with her at a club that night, and the two form a quick friendship. The next day, Stefani proposes that Zola join her on a road trip to Tampa, Florida, the location of a strip club where Stefani claims the two can make significant money. Zola joins Stefani, her mysterious roommate, X, and Stefani's sheepish boyfriend, Derrek (Nicholas Braun), on a road trip.
Upon arriving in Tampa, Stefani, Zola, and X leave Derrek at a seedy motel while they visit the club where Stefani claims her friends earned over $5,000 in one night. The two perform at the club, but do not net nearly as much as Stefani insisted they would. After, Zola learns that Stefani and X have posted photos of her and Stefani in a Backpage advertisement selling a night of sex with them. Zola attempts to leave, but is threatened by X, who reveals himself to be Stefani's pimp.
X brings the women to an upscale hotel, where Stefani proceeds to have sex with a male client. Zola, who does not wish to participate, is affronted when she learns that X is charging only $150 for each sexual encounter Stefani has. Zola edits the Backpage advertisement to help Stefani earn more money; by the end of the night, Stefani has made over $8,000. X is initially insulted by Zola's intervention, but grows impressed. Meanwhile, Derrek, left to his own devices, befriends a man named Dion (Jason Mitchell) whom he meets at the motel. When X, Stefani, and Zola return to the motel, X is enraged to discover that Derrek informed Dion about their reason for visiting Tampa. Worried that Dion and his friend will rob them, X forces the group to flee.

Who plays who in the Zola movie cast?

Here is the full cast and characters of "Zola" movie. Actors and actresses are sorted mostly in credits order.

When is Zola movie release date?

"Zola" movie release date was scheduled to be on January 24, 2020 (Sundance) and on June 30, 2021 (United States) distributing by A24, Sony Pictures Worldwide Acquisitions (SPWA), Stage 6 Films and VVS Films.

What are Zola filming details?

The duration of the film is 90 minutes. With a budget of $5 million, the film grossed over $4.7 million.

"Zola" movie is rated "R", according to the MPAA film rating system.

What are critics and audiences saying about Zola movie?

More information and reviews on "Zola" movie you can get on the following websites.

Zola on IMDB is available at:

Zola on Wikipedia is available at: