Is there a trailer for Justice Society: World War II movie? 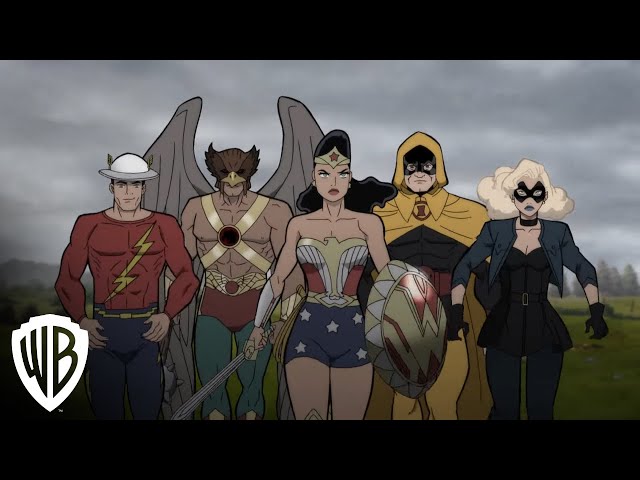 On Earth-2, with Nazi Germany invading most of Europe and Adolf Hitler seeking magical artifacts, President Franklin D. Roosevelt is asked by Colonel Steve Trevor (Chris Diamantopoulos) to get the United States involved by creating a team of superhumans. Consisting of Trevor, Black Canary, Hawkman, Hourman, Jay Garrick (Armen Taylor) / Flash (Matt Bomer), and led by Wonder Woman, the Justice Society of America is formed.
On Earth-1, Barry Allen and Iris West (Ashleigh LaThrop) have a picnic in Metropolis, hoping to get away from "work". However, their plans are disrupted by Superman (Darren Criss) fighting Brainiac (Darin De Paul), and Allen comes to Superman's aid as the Flash. When Brainiac fires a Kryptonite bullet, Flash tries to catch it, but he runs fast enough to channel the Speed Force for the first time. Guided by Doctor Fate's voice, Allen arrives in what he believes is the past during a battle between the JSA and the Nazis. Despite initial confusion over his allegiance, the JSA realizes Allen is an ally after he defeats the Nazis and saves Trevor and that he is apparently from the future. As the team mobilizes to stop a second wave of Nazis, Allen takes Trevor back to base, where he learns about the JSA, whom he never heard of before.
After meeting "Shakespeare", the JSA's war correspondent, and Trevor attempts to propose to Wonder Woman, the JSA meet for their next mission. Despite the risk of causing a time paradox, the heroes realize they need Allen's help in saving a codebreaker from a Nazi fortress who can decode a message Trevor stole.
Arriving at the fortress, the heroes and "Shakespeare" break in, defeat the guards, and discover several prisoners in the dungeons. "Shakespeare" rescues a prisoner who says someone told him of "Shakespeare's" arrival and implores him to prevent something from happening. A guard attacks "Shakespeare", only for the bullets to bounce off of him. When Wonder Woman, Allen, and Trevor arrive, "Shakespeare" identifies himself as Clark Kent. However, when he reveals a different background from the Kent he knows, Allen realizes that he is actually in a parallel reality. The rest of the team finds the codebreaker, whom Hawkman recognizes as Doctor Fate. Breaking the code with his powers, Fate directs the team to the Bermuda Triangle before disappearing.

Who plays who in the Justice Society: World War II movie cast?

Here is the full cast and characters of "Justice Society: World War II" movie. Actors and actresses are sorted mostly in credits order.

What are critics and audiences saying about Justice Society: World War II movie?

More information and reviews on "Justice Society: World War II" movie you can get on the following websites.

Justice Society: World War II on IMDB is available at:

Justice Society: World War II on Wikipedia is available at: