Is there a trailer for Chaos Walking movie? 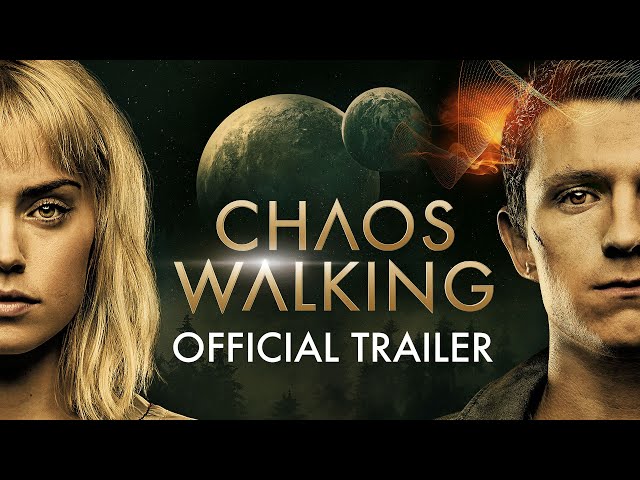 What is Chaos Walking movie plot?

In 2257 AD, the men of the planet New World have been afflicted with the Noise, a condition that causes everyone to see and hear each other's thoughts. The colonists were caught in a civil war with the native aliens that killed all the women, but half the men survived. Todd Hewitt (Tom Holland) lives in Prentisstown with his adoptive fathers, Ben (Demián Bichir) and Cillian Boyd (Kurt Sutter). Other residents include the preacher Aaron (David Oyelowo), the town's mayor David Prentiss (Mads Mikkelsen), and his son Davy (Nick Jonas). A spaceship that lost contact with the First Colony approaches New World and a scout ship is sent to investigate, but it crashes. One day, while Todd is working, he spots someone stealing and chases the thief only to come upon the ruins of the scout ship.
Todd returns to the town and tries to keep quiet, but the other men hear and see his thoughts about the crashed ship; they head to investigate the ruins and sabotage some parts of it, but find no survivors. While Todd is alone, he meets Viola (Daisy Ridley), the crash's only survivor. He is shocked to see a girl, as he has never seen one before. The men from Prentisstown capture Viola and she is brought to the mayor's home, where she is questioned. Prentiss explains to her what the Noise is and what has happened on their planet. While he goes out to speak to the men, Davy is charged to keep an eye on her, but unwittingly toys with one of Viola's gadgets, which causes it to shoot sparks, helping Viola escape. Ben tells Todd about another village called Farbranch and says Viola will be safe there.

Who plays who in the Chaos Walking movie cast?

Here is the full cast and characters of "Chaos Walking" movie. Actors and actresses are sorted mostly in credits order.

What are Chaos Walking filming details?

"Chaos Walking" movie is rated "PG-13", according to the MPAA film rating system.

What are critics and audiences saying about Chaos Walking movie?

"Chaos Walking" movie got average rating from critics. IMDB rating is 5.7/10. Rotten Tomatoes rating is 22/100. Audiences polled by CinemaScore gave the film an average grade of "B" on a scale ranging from A+ to F.

More information and reviews on "Chaos Walking" movie you can get on the following websites.

Chaos Walking on IMDB is available at:

Chaos Walking on Wikipedia is available at: