Here are "Black Is King" movie trailer, plot summary, full cast and characters, release date, streaming services and everything we know so far.

Is there a trailer for Black Is King movie?

Walt Disney Studios on Sunday, July 19, 2020 released the trailer for "Black Is King" you can watch here:
BLACK IS KING, a film by Beyoncé | Official Trailer | Disney+. 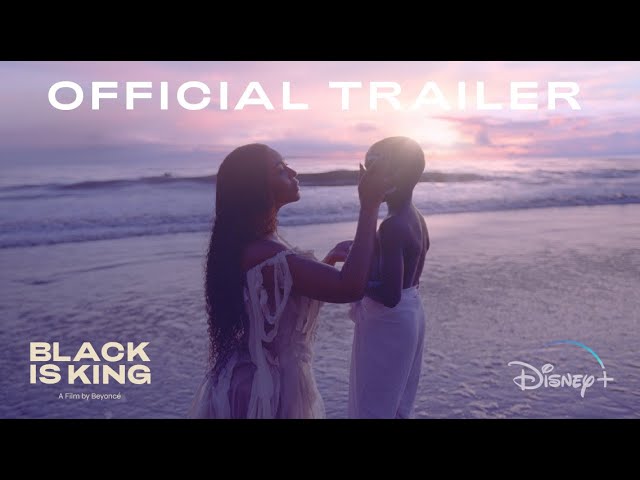 What is Black Is King movie plot?

Here is a short review of "Black Is King" movie plot summary.

On a beach in the spiritual plane, a newborn prince is held by his maternal ancestor while she tells him of his significance and purpose ("Bigger"). She performs rituals for the prince and joins other women who are also holding newborns. On the beach, the prince is anointed with white paint by the ancestor, while in a royal palace, he is similarly anointed by an elder (Mary Twala). The king gives the young prince a small golden scepter and tells the prince that his ancestors look down on them from the stars and will always be there to guide him ("Find Your Way Back").
The young boy is enticed by a monkey to enter a warehouse. A man with a snake asks the boy who he is, but the boy does not answer. The boy stays in the warehouse, adorns himself with gold, and spends his time gambling while being watched by his ancestor and the blue man (Stephen Ojo). Outside, a biker gang arrives and encircles the prince. The king comes to save him and is killed by a bike. The prince's uncle tells the prince to flee the village, and he takes over the throne ("Scar"). In the spiritual plane, the ancestor leads the king's funeral, while the blue man sits alone ("Nile").
The prince dreams of living a carefree life, driving past his ancestor and the blue man. He lives in an extravagant mansion full of expensive clothes, servants, and feasts ("Mood 4 Eva"). The prince remembers his uncle banging on a drum, causing him to drop the scepter into the water. A human chess game takes place in the mansion's ground, reminding the prince of how his father taught him the game, which represented the duality of good and evil. In real life, the prince grows up and moves to the city. He now dreams of spending his time partying with girls inside a tricked-out hearse ("Ja Ara E"). His driver appears as his uncle, who taunts him with the golden scepter. He stumbles out of the car and wakes up. The prince realizes that pursuing material wealth is unsustainable, and he is encouraged to reclaim his purpose and identity ("Already"). His ancestor tells the prince that he will meet himself at the shore, as the blue man walks into the sea ("Water"). The prince is reunited with his childhood love ("Brown Skin Girl"). The couple gets married ("Keys to the Kingdom"), but he is plagued by self-doubt over his purpose.

Who plays who in the Black Is King movie cast?

Here is the full cast and characters of "Black Is King" movie. Actors and actresses are sorted mostly in credits order.

When is Black Is King movie release date?

"Black Is King" movie release date was scheduled to be on July 31, 2020 distributing by Walt Disney Studios Motion Pictures.

What are Black Is King filming details?

What are critics and audiences saying about Black Is King movie?

More information and reviews on "Black Is King" movie you can get on the following websites.

Black Is King on IMDB is available at:

Black Is King on Wikipedia is available at: