Is there a trailer for Wine Country movie? 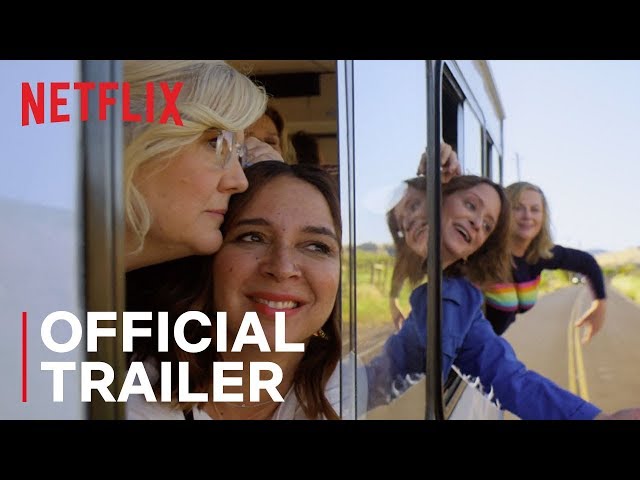 What is Wine Country movie plot?

Abby (Amy Poehler) decides to celebrate her friend Rebecca's (Rachel Dratch) 50th birthday with a weekend getaway over Rebecca's protests that she wants a low-key celebration. Abby, Rebecca (Rachel Dratch) and four of their friends, whom they have known since they were young waitresses, decide to spend the weekend together in Napa.
Rather than allow the women to relax and drink, Abby wants them to adhere to a strict schedule, a way of seizing control as, unbeknownst to the rest of her friends, she has recently lost her job. All the other friends are struggling with problems of their own: Rebecca is in denial that her husband is inattentive and her friends hate him, Naomi (Maya Rudolph) is afraid of receiving test results from her doctor, successful business woman Catherine (Ana Gasteyer) feels that the rest of the friends are cutting her out, Val (Paula Pell) is looking for love and Jenny (Emily Spivey) a depressive writer, is simply miserable in life.
On Friday the friends eat at an expensive restaurant where Val flirts with their waitress, Jade (Maya Erskine).
The following morning the women have a sinister tarot reading from a woman called Lady Sunshine (Cherry Jones). Afterwards they go day drinking around Napa. Near the end of their tour there is tension when Abby snaps at the other women for not adhering to their schedule. When Rebecca goes to talk to her about her attitude Abby reveals that she lost her job. In anger Abby throws out her schedule and the women decide to go to Jade's art gallery opening.
They are shocked that Jade's art is all related to The Nanny. During a Q&A Abby rants on how younger generations have it too easy but ends her speech by saying that they are Fran Fine (in reference to Fran Drescher's character on the show The Nanny) causing the art goers to believe she is a part of the exhibit. Val stays behind to flirt with Jade but when she tries to ask her out Jade assumes she is trying to buy a painting and humiliated, Val agrees to buy it.

Who plays who in the Wine Country movie cast?

Here is the full cast and characters of "Wine Country" movie. Actors and actresses are sorted mostly in credits order.

"Wine Country" movie release date was scheduled to be on May 8, 2019 distributing by Netflix.

What are Wine Country filming details?

"Wine Country" movie is rated "R", according to the MPAA film rating system.

What are critics and audiences saying about Wine Country movie?

"Wine Country" movie got high rating from critics. IMDB rating is 5.5/10. Rotten Tomatoes rating is 65/100. But the audience dislikes the film.

More information and reviews on "Wine Country" movie you can get on the following websites.

Wine Country on IMDB is available at:

Wine Country on Wikipedia is available at: