Here are "Batman vs. Two-Face" movie trailer, plot summary, full cast and characters, release date and everything we know so far.

Is there a trailer for Batman vs. Two-Face movie? 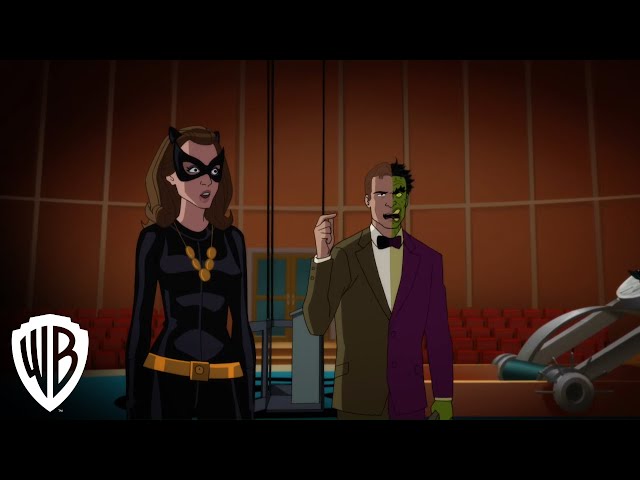 What is Batman vs. Two-Face movie plot?

Here is a short review of "Batman vs. Two-Face" movie plot summary.

Batman (Adam West) and Robin (Burt Ward) meet Gotham District Attorney Harvey Dent at a top-secret demonstration hosted by Professor Hugo Strange. With his assistant Dr. Harleen Quinzel (Sirena Irwin), Strange operates a machine called the "Evil Extractor" designed to siphon evil from criminals and store it in a vat. Batman scoffs, noting there is no easy path to righteousness, but the machine does work - too well, as the Joker and other volunteers laugh manically in an attempt to overload the machine. The containment vat explodes, drenching Dent with liquified evil, which scars half his face and changes his personality.
Harvey, now re-christened Two-Face (William Shatner), embarks on a criminal career as seen in the opening credits, all of which his attempts are foiled by the Dynamic Duo. He is eventually whisked to a hospital where his face has been given reconstructive surgery. His sanity has apparently been restored as well, and he is allowed to resume crimefighting as the assistant to the Assistant District Attorney.
Six months later, the Dynamic Duo engage King Tut and his henchmen, who have stolen a biplane and attacked an Egyptian-themed event that Aunt Harriet and Alfred Pennyworth (Steven Weber) are attending. While the civilians escape, the heroes are subdued by Tut's goons. They escape a deathtrap using Batjets in their shoes and capture Tut and his men, but their loot is taken by Two-Face's henchmen, unknown to Batman and Robin.
Batman, Robin, Commissioner Gordon (Jim Ward) and Chief O'Hara interrogate McElroy as Harvey waits in the shadows, with O'Hara constantly hitting the professor on the head with his truncheon to switch his personality, with Tut's stubborn attitude causing himself to bring back McElroy. McElroy's lawyer Lucilee Diamond (Lee Meriwether) intervenes and ushers them out of the room so that she can speak to him. At Professor McElroy's trial, she implicates that the concussion is nothing more than a threat to a mild-mannered man. Chief O'Hara tearfully confesses to hitting McElroy and Harvey calls Batman as his next witness, but Professor McElroy himself admits his guilt, ready to suffer the minimum penalty of being rehabilitated in prison. After the sentencing, Harvey shares a highball with Bruce Wayne much to Dick's annoyance at bearing the hardships of a third wheel.

Who plays who in the Batman vs. Two-Face movie?

Here is the full cast and characters of "Batman vs. Two-Face" movie. Actors and actresses are sorted mostly in credits order.

When is Batman vs. Two-Face movie release date?

What are Batman vs. Two-Face filming details?

The duration of the film is 72 minutes.

What are critics and audiences saying about Batman vs. Two-Face movie?

"Batman vs. Two-Face" movie got high rating from critics. IMDB rating is 6.2/10. Rotten Tomatoes rating is 100/100. The audience also kinda likes the film.

More information and reviews on "Batman vs. Two-Face" movie you can get on the following websites.

Batman vs. Two-Face on IMDB is available at:

Batman vs. Two-Face on Wikipedia is available at: