Is there a trailer for Girls Trip movie?

Universal Pictures on Wednesday, May 10, 2017 released the trailer for "Girls Trip" you can watch here:
Girls Trip - Official Trailer #2 . 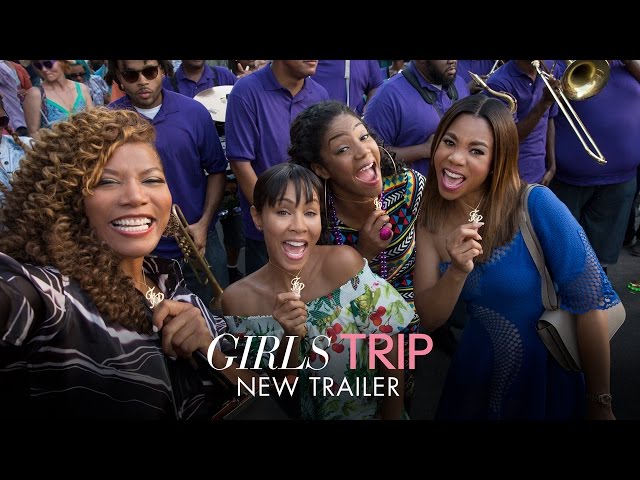 What is Girls Trip movie plot?

In an attempt to reconnect with her friends from college, lifestyle guru Ryan Pierce (Regina Hall), dubbed "the next Oprah," decides to invite her friends on a girls' trip to Essence Music Festival in New Orleans, where she will be the keynote speaker. Known as the "Flossy Posse," the group includes Sasha, an ex-journalist from Time magazine who now owns a floundering gossip site and is struggling financially; Lisa (Jada Pinkett Smith), a nurse and uptight single mother who has not had a boyfriend since her divorce years earlier; and Dina (Tiffany Haddish), a happy-go-lucky, impulsive party animal who was fired after harming a co-worker who accidentally ate her lunch.
Shortly after arriving, Sasha receives a photo of Ryan's husband Stewart (Mike Colter) kissing another woman. The friends are reluctant to tell Ryan initially, but Ryan admits she is already aware of the situation and informs her friends that the two are in couple's therapy to address Stewart's infidelity. After Dina confronts Stewart at their hotel with a broken bottle, the Flossy Posse are ejected and settles into a one-star motel instead. At the Essence Fest later that night, they run into an old friend Julian (Larenz Tate), a musician performing at the festival who Ryan flirts with. He later gives up his hotel suite so that the women have somewhere decent to stay.
The next day, Ryan and Stewart host a cooking demonstration together at the music festival that goes awry when Stewart's mistress, Simone (Deborah Ayorinde), shows up. A potential investor is impressed, however, and a business meeting is set up for Ryan and Stewart with their agent, Elizabeth, who then introduces Ryan and Stewart to Bethany Marshall (Lara Grice). Dina serves the women absinthe right before the meeting, causing them to hallucinate. At her meeting, Ryan thinks the waitress is Stewart's mistress; Lisa thinks her kids are at the club with her; Dina thinks she is flying; and Sasha thinks she is making out with an attractive man who is actually a lamp. The girls eventually pull Ryan out of the meeting and decide to go to a club to dance the absinthe off. They run into Simone and her friends and engage in a dance off before getting in a bar fight. Julian picks them up before they can get arrested and takes them back to their hotel.

Who plays who in the Girls Trip movie?

Here is the full cast and characters of "Girls Trip" movie. Actors and actresses are sorted mostly in credits order.

What are Girls Trip filming details?

"Girls Trip" movie is rated "R", according to the MPAA film rating system.

What are critics and audiences saying about Girls Trip movie?

"Girls Trip" movie got high rating from critics. IMDB rating is 6.2/10. Rotten Tomatoes rating is 91/100. The audience also likes the film. Audiences polled by CinemaScore gave the film an average grade of "A+" on a scale ranging from A+ to F.

More information and reviews on "Girls Trip" movie you can get on the following websites.

Girls Trip on IMDB is available at:

Girls Trip on Wikipedia is available at: