Is there a trailer for Point Blank movie? 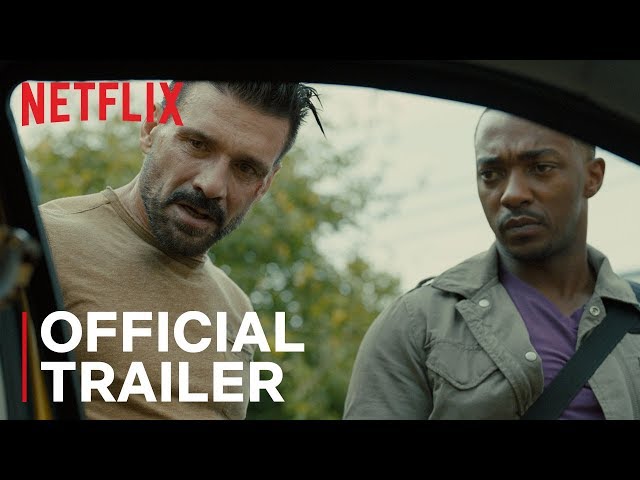 What is Point Blank movie plot?

Abe Guevara (Frank Grillo) is caught in a shootout at a residential home that results in the death of District Attorney Joshua Gregory. He is chased on foot and attempts to escape with his brother Mateo, but Abe is hit by a car, and is subsequently sent to a local hospital. A pair of homicide detectives, Regina Lewis (Marcia Gay Harden) and Eric Masterson (Boris McGiver), are assigned to the case.
Paul Booker (Anthony Mackie), an everyman ER nurse, is assigned to oversee Abe's recovery at the hospital. Mateo, determined to break Abe out in order to pay off a debt with Big D (Markice Moore), an influential gangster, kidnaps Paul's pregnant wife Taryn (Teyonah Parris) and coerces Paul into working for him. Paul breaks out Abe on his stretcher, and they evade detectives Lewis and Masterson just shortly after they arrive. Abe reveals that he is in possession of a flash drive, that can expose several corrupt police officers; while making the deal to distribute the flash drive to Gregory, they were ambushed, and Abe was wrongfully incriminated for his death. Abe arranges to meet Mateo at a bus station, but realizing that it is a sting operation, they incite a shootout and flee, engaging in a car chase. After fighting off more cops at a car wash, they escape on foot.
Seeking a new car, they consult a local gangster, Cheetah (Daniel R. Hill). Lewis and Masterson arrive, and hold them all at gunpoint. Masterson realizes that Lewis is one of the corrupt cops on the drive, leading her to kill both Masterson and Cheetah. Paul kills her accomplice Jones (Nik Pajic) while she is distracted with incoming reinforcements. Abe rendezvouses with Mateo, but he is ambushed for the drive as well by one of Lewis' men, who abduct Taryn. Abe and Paul arrive at the rendezvous, only to find Mateo mortally wounded. He succumbs to his injuries, and dies. Lewis threatens the two, revealing that she is holding Taryn hostage.

Who plays who in the Point Blank movie cast?

Here is the full cast and characters of "Point Blank" movie. Actors and actresses are sorted mostly in credits order.

"Point Blank" movie release date was scheduled to be on July 12, 2019 (United States) distributing by Netflix.

What are Point Blank filming details?

What are critics and audiences saying about Point Blank movie?

More information and reviews on "Point Blank" movie you can get on the following websites.

Point Blank on IMDB is available at:

Point Blank on Wikipedia is available at: