Is there a trailer for Sylvie's Love movie? 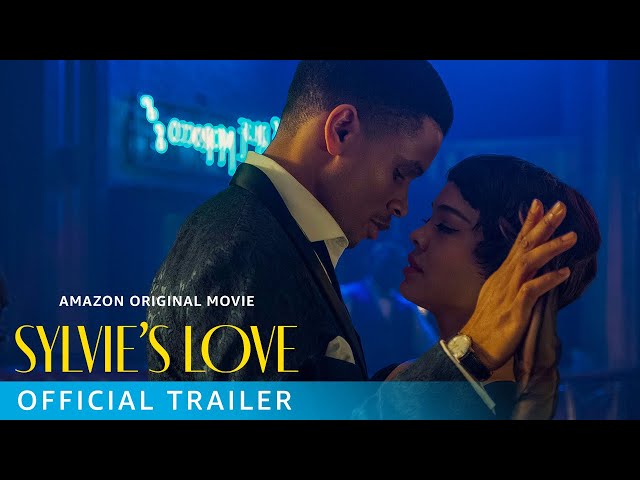 What is Sylvie's Love movie plot?

In New York City, 1962, Sylvie (Tessa Thompson) is waiting in the lobby of Town Hall, while Robert (Nnamdi Asomugha) is in a recording studio playing the saxophone. Moments later, Sylvie recognizes Robert on the sidewalk outside a theater.
Five years earlier, Robert and his roommates sit for breakfast, while Sylvie works at her father's music store. Robert spots Sylvie in the window, and eyes the Help Wanted sign. He asks Sylvie about a Thelonious Monk album, which she distractedly directs him to while watching I Love Lucy. Robert calls for her attention to pay for the album and asks about the Help Wanted sign. Sylvie explains that they aren't actually looking for help; that her mother uses the sign for optics despite the fact that her father can't afford help, and she works there while her fiancé is stationed in Korea. Her father, overhearing the exchange, comes out from the backroom and hires Robert on the spot.
That night, Robert is seen playing a gig at a nightclub. They meet Genie, who invites Bobby to sit and discuss his experimental music. She asks Bobby to join an impromptu jam session at her home. Sylvie and her cousin, Mona (Aja Naomi King), catch sun on the rooftop while catching up. Sylvie denies having noticed Bobby, romantically. In the meantime, Bobby works with Sylvie's father at the shop, discussing music and Sylvie's aspiration to become a TV producer.
Later in the evening, Bobby and his quartet arrive at Genie's jam session. Genie asks Dickinson Brewster about the group's management and fronts money for new suits before he agrees to have her manage them. Robert walks in on Sylvie, dancing in the shop while she cleans. She and Bobby end up locked in the basement, waiting for her father to rescue them. They share cigarettes on the steps. She points out that Bobby has a French Light, signifying that he is to fall in love soon. Bobby points out that Sylvie has the same light to her cigarette.

Who plays who in the Sylvie's Love movie?

Here is the full cast and characters of "Sylvie's Love" movie. Actors and actresses are sorted mostly in credits order.

"Sylvie's Love" movie release date was scheduled to be on January 27, 2020 (Sundance) and on December 23, 2020 (United States) distributing by Amazon Studios and Amazon Prime Video.

What are Sylvie's Love filming details?

"Sylvie's Love" movie is rated "PG-13", according to the MPAA film rating system.

What are critics and audiences saying about Sylvie's Love movie?

More information and reviews on "Sylvie's Love" movie you can get on the following websites.

Sylvie's Love on IMDB is available at:

Sylvie's Love on Wikipedia is available at: