Here are "The One and Only Ivan" movie trailer, plot summary, full cast and characters, release date and everything we know so far.

Is there a trailer for The One and Only Ivan movie? 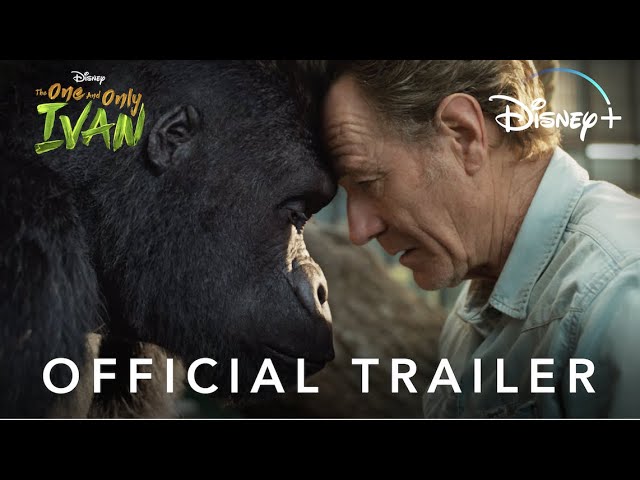 What is The One and Only Ivan movie plot?

Here is a short review of "The One and Only Ivan" movie plot summary.

Ivan (Sam Rockwell), a silverback western lowland gorilla, lives in the enclosure at Big Top Mall. He performs for Mack (Bryan Cranston), the owner, alongside other performers; a wise and nurturing African elephant named Stella (Angelina Jolie), a spoiled poodle named Snickers (Helen Mirren), a spunky chicken named Henrietta (Chaka Khan), a fire truck-riding rabbit named Murphy (Ron Funches), a paranoid sea lion named Frankie (Mike White) and a loquacious parrot named Thelma (Phillipa Soo). Ivan is accompanied by a stray mutt, who they later name Bob (Danny DeVito), who secretly lives in his enclosure. Mack's janitorial employee George (Ramón Rodríguez) brings his daughter Julia (Ariana Greenblatt) who frequently interacts with Ivan. One day, Julia leaves her old crayons with Ivan who suddenly begins taking an interest in drawing with them. Julia is apparently the only one who can decipher his drawings and what they mean.
The Big Top Mall begins losing business much to Mack's concern, but becomes excited when he purchases a baby elephant named Ruby (Brooklynn Prince) who begins to draw in a crowd. Ivan is initially hesitant over accepting Ruby, especially when she begins to pry into his personal life. When Stella, who has been caring for Ruby, suddenly becomes weaker and unable to perform, Ivan gives Ruby encouragement to embrace the crowd on her own. Afterwards, Ruby asks Ivan to tell her a story and Ivan reveals how Mack and his wife Helen (Hannah Bourne) adopted him when he was just a baby. As Ivan got bigger, Mack became forgiving of his animalistic behavior, but Helen left him out of frustration. Mack eventually purchased the mall and turned it into a circus. Stella asks Ivan to look after Ruby and make sure she is free before passing away.

Who plays who in the The One and Only Ivan movie?

Here is the full cast and characters of "The One and Only Ivan" movie. Actors and actresses are sorted mostly in credits order.

Sam Rockwell  as Ivan a western lowland gorilla that was rescued at a young age by Mack
Angelina Jolie  as Stella a wise African bush elephant that as Ivan's friend
Bryan Cranston  as Mack the owner and ringmaster of the Big Top Mall
Danny DeVito  as Bob a stray dog that as Ivan's friend and often sneaks into the Big Top Mall much to the annoyance of Mack
Ariana Greenblatt  as Julia George's daughter
Helen Mirren  as Snickers a spoiled white poodle owned by Mack
Owain Arthur  as Castello a security guard at the Big Top Mall
Hannah Bourne  as Helen Mack's ex-wife
Ramón Rodríguez  as George Julia's father and a janitor at the Big Top Mall
Eleanor Matsuura  as Candace Taylor a news reporter
Chaka Khan  as Henrietta a spunky silkie chicken
Indira Varma  as Dr. Maya Wilson a zoologist
Phillipa Soo  as Thelma a loquacious blue-and-yellow macaw
Ron Funches  as Murphy a white European rabbit
Brooklynn Prince  as Ruby a baby African bush elephant that Mack obtains from a bankrupt circus
Mike White  as Frankie a nervous California sea lion that balances a ball
Kevin Mathurin  as Mike
Betsy Graver  as Mother in Park
Beckett Handley  as Boy in Photo
Larry Ridley  as Male Reporter
Kriss Dillon  as Male Animal Handler 1
Max Dowler  as Male Animal Handler 2
Gary Greenham  as Cage Guy

When is The One and Only Ivan movie release date?

"The One and Only Ivan" movie release date was scheduled to be on August 21, 2020 (United States) and on August 27, 2020 (Germany) distributing by Walt Disney Studios Motion Pictures Argentina and 20th Century Fox.

What are The One and Only Ivan filming details?

"The One and Only Ivan" movie is rated "PG", according to the MPAA film rating system.

Principal photography began on May 1, 2018 in Lakeland, Florida, with locations for the film including the Southgate Shopping Center and Resurrection Catholic Church.

What are critics and audiences saying about The One and Only Ivan movie?

More information and reviews on "The One and Only Ivan" movie you can get on the following websites.

The One and Only Ivan on IMDB is available at:

The One and Only Ivan on Wikipedia is available at: