Is there a trailer for Eighth Grade movie? 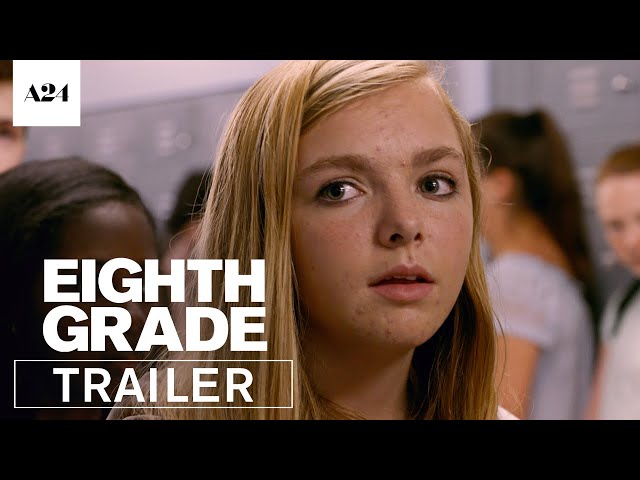 What is Eighth Grade movie plot?

Kayla Day (Elsie Fisher) is an eighth grader in her final week at Miles Grove Middle School, a public school in a small New York town. She posts motivational vlogs on YouTube about confidence and self-image that receive little to no views. Nervous and struggling to make friends at school, she is voted "Most Quiet" by her classmates. Meanwhile, her single father Mark (Josh Hamilton) struggles to connect with her and break her reliance on social media.
Kayla is invited to popular classmate Kennedy's pool party by Kennedy's mother. At the party, she has a panic attack in the bathroom but eventually goes outside to swim, where she meets Kennedy's nerdy cousin Gabe (Jake Ryan). After trying to leave the party early, she has an awkward encounter with her crush Aiden, who suggests that she rejoin the party. She overcomes her fear and volunteers to sing karaoke.
Hearing that Aiden broke up with his last girlfriend because she refused to send him nude photos of herself, Kayla tells Aiden that she has a folder of dirty photos of herself on her phone, a lie which piques his interest. He asks if she gives blowjobs; unsure of what to say, she says she does, but she later looks up oral sex instructions on YouTube and is disgusted by what she finds.
Kayla attends a high school shadow program, where she meets a friendly senior named Olivia (Emily Robinson) who shows her around the school. Olivia gives Kayla her number and later invites her to the mall with some friends. They have a good time, but a mortified Kayla spots her father spying from afar and orders him to leave. Olivia's friend Riley (Daniel Zolghadri) gives Kayla a ride home from the mall and initiates an awkward game of truth or dare in which he asks about her sexual experience, takes off his shirt, and asks her to remove hers. She refuses and he backs off, angrily claiming he was just trying to help her gain some experience. Kayla breaks down at home and is comforted by Mark.

Who plays who in the Eighth Grade movie cast?

Here is the full cast and characters of "Eighth Grade" movie. Actors and actresses are sorted mostly in credits order.

What are Eighth Grade filming details?

"Eighth Grade" movie is rated "R", according to the MPAA film rating system.

What are critics and audiences saying about Eighth Grade movie?

More information and reviews on "Eighth Grade" movie you can get on the following websites.

Eighth Grade on IMDB is available at:

Eighth Grade on Wikipedia is available at: