Is there a trailer for Ferdinand movie? 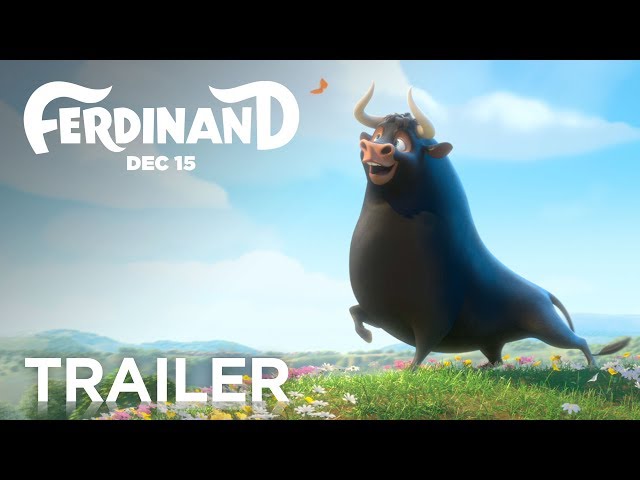 What is Ferdinand movie plot?

Here is a short review of "Ferdinand" movie plot summary.

In Spain, young Ferdinand (John Cena) lives with other calves and bulls at Señor Moreno's "Casa del Toro", where bulls are trained for the bullfighting ring. Ferdinand is a pacifist, and is bullied by the other calves Valiente, Guapo (Peyton Manning), and Bones (Anthony Anderson). A matador arrives, and the calves' fathers fight to impress him. Ferdinand's father Raf is picked, and Valiente crushes Ferdinand's favorite flower in retaliation. Raf does not come back from the ring, and upon realizing that his father is dead, Ferdinand runs away from Casa del Toro. He winds up on a flower farm owned by Juan (Juanes) and his daughter Nina (Lily Day), who adopt him, much to the annoyance of their dog Paco (Jerrod Carmichael).
Some years later, Ferdinand has grown into an enormous but still gentle bull. Juan determines that Ferdinand looks too intimidating to take along to the annual Flower Festival in Ronda, as in previous years. Ferdinand follows them anyway, but is stung by a bee and panics, accidentally destroying the town square. Animal Control officers deem him dangerous, and take him away before Nina and Juan can explain.
The officers decide to give Ferdinand to Casa del Toro, where he meets his old comrades Valiente, Bones, and Guapo, as well as new additions Lupe (Kate McKinnon) the goat, Angus (David Tennant) the Highland bull, and lab-cloned Galloway Maquina (Tim Nordquist). Ferdinand tries to escape, but is stopped by three German Lipizzan horses, who now keep watch to prevent any more bulls from escaping.
Self-centered matador El Primero (Miguel Ángel Silvestre) arrives, needing a bull for his final bullfight before retirement. Moreno (Raúl Esparza) puts all the bulls in a ring to fight it out, but Ferdinand refuses to take part, causing a chain of mishaps when he tries to help Guapo recover from a stage fright-induced faint. El Primero gives Moreno two days to get the bulls into shape. Guapo is sent to the slaughterhouse, and Valiente informs a horrified Ferdinand that non-fighters now become meat.

Who plays who in the Ferdinand movie cast?

Here is the full cast and characters of "Ferdinand" movie. Actors and actresses are sorted mostly in credits order.

When is Ferdinand movie release date?

What are Ferdinand filming details?

"Ferdinand" movie is rated "PG", according to the MPAA film rating system.

What are critics and audiences saying about Ferdinand movie?

"Ferdinand" movie got high rating from critics. IMDB rating is 6.7/10. Rotten Tomatoes rating is 72/100. The audience also kinda likes the film. Audiences polled by CinemaScore gave the film an average grade of "A" on a scale ranging from A+ to F.

More information and reviews on "Ferdinand" movie you can get on the following websites.

Ferdinand on IMDB is available at:

Ferdinand on Wikipedia is available at: