Here are "Truth or Dare" movie trailer, plot summary, full cast and characters, release date and everything we know so far.

Is there a trailer for Truth or Dare movie?

Universal Pictures on Wednesday, January 03, 2018 released the trailer for "Truth or Dare" you can watch here:
Blumhouse's Truth or Dare - Official Trailer . 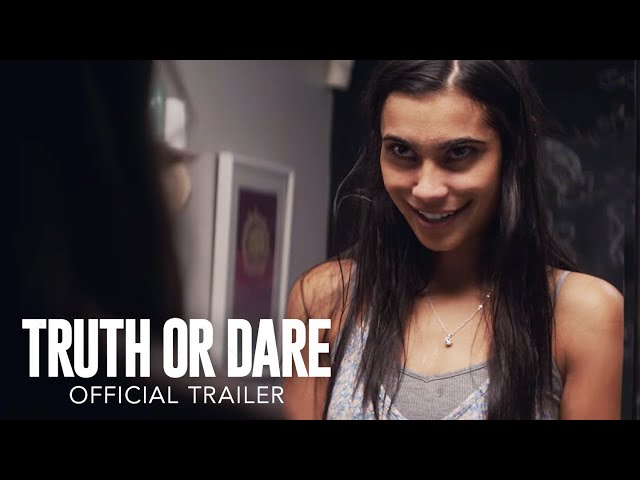 What is Truth or Dare movie plot?

Here is a short review of "Truth or Dare" movie plot summary.

Olivia Barron (Lucy Hale) is a college senior who is seen by others as a good girl who always puts others' needs before her own. During her last spring break, although she initially plans to build houses with Habitat for Humanity, her best friend Markie (Violett Beane) convinces her to come to Mexico with their friends instead. At a bar, Olivia meets a man named Carter (Landon Liboiron) who invites them to go drinking at an abandoned church. There, Carter suggests they play truth or dare. During the game, their friend Tyson reveals that Olivia has a secret crush on Lucas (Tyler Posey), Markie's boyfriend, which she denies. Carter admits that he tricked them into playing a supernatural version of the game and warns them to do whatever the game asks or they will die.
Back at school, Olivia sees hallucinations calling on her to pick truth or dare. She picks "truth" and blurts out that Markie has been serially unfaithful to Lucas. The friends learn that Ronnie (Sam Lerner), another friend, was forced to kill himself after failing to complete a dare. Lucas picks "truth" and admits that he has always had feelings for Olivia. Markie is forced to break Olivia's hand while their closeted friend Brad (Hayden Szeto) is forced to admit to his father that he is gay.
Disbelieving the reality of the game, Tyson denies his turn and is killed. The group discovers a story online about a woman named Giselle who lit a woman on fire in Mexico while playing truth or dare. They arrange a meeting with her through social media. Giselle reveals that her friends were playing the game in that same church. One friend, Sam, got drunk and began trashing the place. When they got home, the game somehow continued and only she and Carter survived. Carter was dared to involve more players in the game to give themselves more time before it became their turn again. Giselle reveals that she has been dared to kill Olivia and tries to shoot her, but her friend Penelope dives in front and is killed instead. Having failed her dare, Giselle is forced to kill herself.

Who plays who in the Truth or Dare movie?

Here is the full cast and characters of "Truth or Dare" movie. Actors and actresses are sorted mostly in credits order.

When is Truth or Dare movie release date?

What are Truth or Dare filming details?

"Truth or Dare" movie is rated "PG-13", according to the MPAA film rating system.

What are critics and audiences saying about Truth or Dare movie?

"Truth or Dare" movie got average rating from critics. IMDB rating is 5.2/10. Rotten Tomatoes rating is 16/100. The audience dislikes the film either. Audiences polled by CinemaScore gave the film an average grade of "B-" on a scale ranging from A+ to F.

More information and reviews on "Truth or Dare" movie you can get on the following websites.

Truth or Dare on IMDB is available at:

Truth or Dare on Wikipedia is available at: