Here are "The Magnificent Seven" movie trailer, plot summary, full cast and characters, release date and everything we know so far.

Is there a trailer for The Magnificent Seven movie? 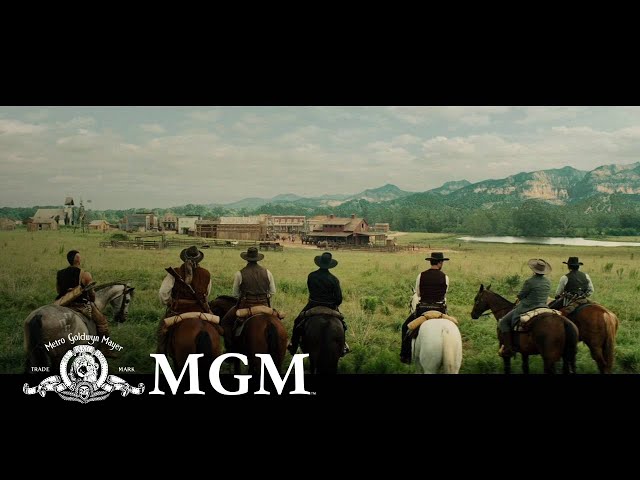 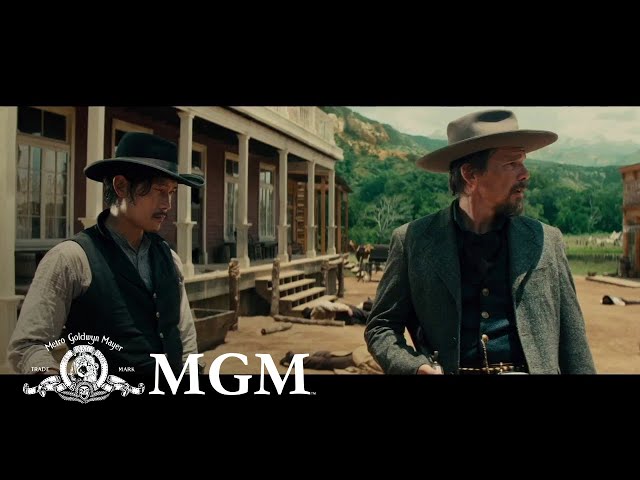 What is The Magnificent Seven movie plot?

Here is a short review of "The Magnificent Seven" movie plot summary.

In 1879, robber baron and gold-mining tycoon Bartholomew Bogue (Peter Sarsgaard), accompanied by an army of hired guns, seizes control of the American frontier town of Rose Creek by force, enslaving the residents to get cheap labor for his mines. When the residents gather at the town church to denounce him, Bogue has the church torched and orders that a group of prominent citizens, including town leader Matthew Cullen (Matt Bomer), be murdered to intimidate them into submission. Matthew's widow, Emma Cullen (Haley Bennett), and her friend Teddy secretly leave to hire bounty hunters to help liberate the town. Their first recruit is Sam Chisholm (Denzel Washington), a famous African-American U.S. Marshal, who expresses interest only after hearing of Bogue's involvement.
Chisholm then recruits several other men: gambler and trick-shooter Joshua Faraday (Chris Pratt), reformed Mexican outlaw Vasquez (Manuel Garcia-Rulfo), former Confederate marksman Goodnight "Goody" Robicheaux (Ethan Hawke), Billy Rocks (Lee Byung-Hun), a Korean knife-thrower who hustles gunfighters for Robicheaux, and legendary game hunter Jack Horne (Vincent D'Onofrio). The group soon adds an additional member, a Comanche warrior named Red Harvest (Martin Sensmeier).
The Seven enter Rose Creek and eliminate thirty-four Blackstone "detectives" hired to guard the town. Chisholm apprehends the corrupt sheriff, Mr. Harp, and sends him away to inform Bogue that they now control his holdings in Rose Creek. The Seven correctly guess that they only have seven days before Bogue's men arrive. They liberate the townspeople from captivity, and spend the next week fortifying the town and training anyone who can hold a gun to shoot. Meanwhile, Bogue shoots Harp dead for his failure, and orders his Comanche enforcer, Denali (Jonathan Joss), and his right-hand man McCann (Cam Gigandet) to take back Rose Creek. Robicheaux, haunted by his experiences in the Civil War and fearing his own death if he kills again, leaves the town the night before Bogue's arrival; Emma volunteers to take his place.

Who plays who in the The Magnificent Seven movie?

Here is the full cast and characters of "The Magnificent Seven" movie. Actors and actresses are sorted mostly in credits order.

When is The Magnificent Seven movie release date?

What are The Magnificent Seven filming details?

"The Magnificent Seven" movie is rated "PG-13", according to the MPAA film rating system.

What are critics and audiences saying about The Magnificent Seven movie?

"The Magnificent Seven" movie got high rating from critics. IMDB rating is 6.9/10. Rotten Tomatoes rating is 64/100. The audience also likes the film. Audiences polled by CinemaScore gave the film an average grade of "A-" on a scale ranging from A+ to F.

More information and reviews on "The Magnificent Seven" movie you can get on the following websites.

The Magnificent Seven on IMDB is available at:

The Magnificent Seven on Wikipedia is available at: