Is there a trailer for Justice League Dark movie? 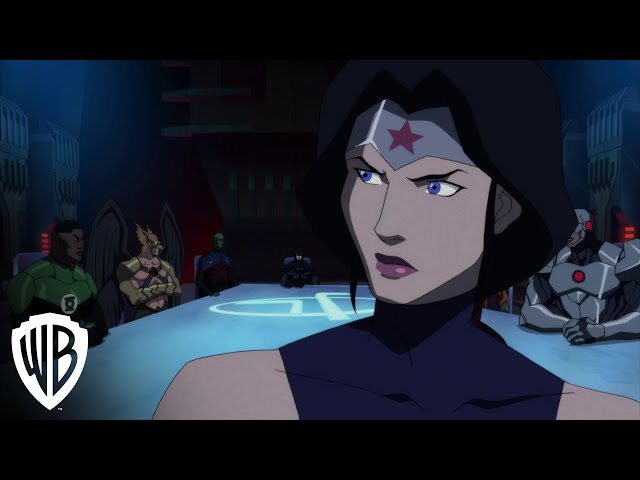 In a flashback, exorcist and con man John Constantine (Matt Ryan) and Jason Blood (Ray Chase) engage the Demons Three in a poker game for high-end stakes; Constantine offers his home, the House of Mystery, as his part of the pool in exchange for a box of artifacts, including a chipped Dreamstone. When both parties are caught cheating, Constantine has Blood summon Etrigan - a demon forced to share a body with Blood - to dispatch the demons. Afterward, Blood reprimands Constantine for making him summon Etrigan, and the two part ways.
In the present, a magical threat arises causing violent murders to be committed by law-abiding people around the world, who think their victims are demonic creatures. The Justice League gather to conclude that magic is the source of the crimes, but Bruce Wayne (Jason O'Mara) / Batman is skeptical. Later that night at Wayne Manor, Bruce finds a written message on his walls telling him to find Constantine prompting him to seek out a reluctant Zatanna (Camilla Luddington) "Z" Zatara. Zatanna is eventually convinced by Boston Brand (Nicholas Turturro) / Deadman. Zatanna and Boston lead Bruce to the House of Mystery, where they meet Constantine, who is reluctantly working with a team. The group is also joined by Black Orchid (Colleen O'Shaughnessey), the spiritual embodiment of the House of Mystery, and they decide to investigate the cause behind these supernatural occurrences. The team then visits Ritchie Simpson (Jeremy Davies), an old friend of Constantine and Zatanna, where they find shroud spirits of Death waiting to collect Ritchie's soul upon his upcoming demise. Simpson has cancer and is resentful towards Constantine for abandoning him to his fate, but loans them the Keshanti Key. Constantine and Zatanna use the key to view one of the victim's memories and discover he was possessed by an unknown entity. A magical creature is conjured to consume the man, but Batman, Deadman, Constantine and Zatanna narrowly escape and destroy it.

Who plays who in the Justice League Dark movie?

Here is the full cast and characters of "Justice League Dark" movie. Actors and actresses are sorted mostly in credits order.

"Justice League Dark" movie release date was scheduled to be on January 24, 2017 (digital) and on February 7, 2017 (DVD and Blu-ray release) distributing by Warner Home Video and HBO Max.

What are critics and audiences saying about Justice League Dark movie?

More information and reviews on "Justice League Dark" movie you can get on the following websites.

Justice League Dark on IMDB is available at:

Justice League Dark on Wikipedia is available at: