Is there a trailer for Vice movie? 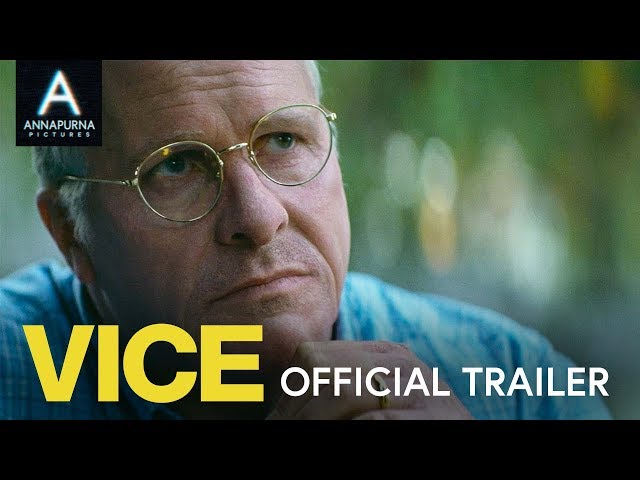 What is Vice movie plot?

Here is a short review of "Vice" movie plot summary.

Vice is narrated by Kurt (Jesse Plemons), who is depicted as a veteran of the War in Afghanistan (2001 - 2021) and Iraq Wars.
In 1963, Dick Cheney (Christian Bale) works as a lineman in Wyoming after his alcoholism led him to drop out of Yale University. After Cheney is stopped by a traffic cop for driving while intoxicated, his wife Lynne Cheney (Amy Adams) tells him to clean up his life or she'll leave him.
In 1969, Cheney finds work as a White House intern during the Nixon Administration. Working under Nixon's economic adviser, Donald Rumsfeld (Steve Carell), Cheney becomes a savvy political operative as he juggles commitments to his wife and their daughters, Liz and Mary. Cheney overhears Henry Kissinger (Kirk Bovill) discussing the secret bombing of Cambodia with President Richard Nixon, revealing the true power of the executive branch to Cheney. Rumsfeld's abrasive attitude leads to him and Cheney being distanced from Nixon, which works in both men's favor; after Nixon's resignation, Cheney rises to the position of White House Chief of Staff for President Gerald Ford (Bill Camp) while Rumsfeld becomes Secretary of Defense. The media later dubs the sudden shake-up in the cabinet as the Halloween Massacre. During his tenure, a young Antonin Scalia (Matthew Jacobs) introduces Cheney to the unitary executive theory.
After Ford is voted out of office, Cheney runs to be representative for Wyoming. After giving an awkward and uncharismatic campaign speech, Cheney suffers his first heart attack. While he recovers, Lynne campaigns on her husband's behalf, helping him to win a seat in the U.S. House of Representatives. During the Reagan Administration, Cheney supports a raft of conservative, pro-business policies favoring the fossil fuel industries, as well as the abolishment of the FCC fairness doctrine which led to the rise of Fox News, conservative talk radio, and the increasing level of party polarization in the United States. Cheney next serves as Secretary of Defense under President George H. W. Bush during the Gulf War. Outside of politics, Cheney and Lynne come to terms with their younger daughter, Mary, coming out as lesbian. Though Cheney develops ambitions to run for president, he decides to retire from public life to spare Mary from media scrutiny.

Who plays who in the Vice movie cast?

Here is the full cast and characters of "Vice" movie. Actors and actresses are sorted mostly in credits order.

When is Vice movie release date?

What are Vice filming details?

"Vice" movie is rated "R", according to the MPAA film rating system.

What are critics and audiences saying about Vice movie?

"Vice" movie got high rating from critics. IMDB rating is 7.2/10. Rotten Tomatoes rating is 65/100. The audience also kinda likes the film. Audiences polled by CinemaScore gave the film an average grade of "C+" on a scale ranging from A+ to F.

More information and reviews on "Vice" movie you can get on the following websites.

Vice on IMDB is available at:

Vice on Wikipedia is available at: